Previous post
Dear White House: No, Joe Biden is NOT a "Leading Statesman"

Why Women Need to Stop Hating on Candace Cameron

Why Women Need to Stop Hating on Candace Cameron

by Ericka Andersen in Headlines 16 Comments

I woke up this morning to hear there was some major controversy about Candace Cameron (aka D.J. Tanner of “Full House”) floating around the Internet. Immediately, I wondered what the heck she said that caused such a stir. So, let’s get started there:

The former “Full House” star wrote a book, “Balancing It All: My Story of Juggling Priorities and Purpose,” and wrote, “I quickly learned that I had to find a way of honoring his take-charge personality and not get frustrated about his desire to have the final decision on just about everything. I am not a passive person, but I chose to fall into a more submissive role in our relationship because I wanted to do everything in my power to make my marriage and family work.”

…The definition that I’m using with submissive is the biblical definition,” she explained. “It’s meekness. It is not weakness. It’s strength under control. It’s bridled strength.”

Any time someone mentions that word “submissive”  — the female audience in this country refuses to hear anything else. That’s unfortunate — because we are each entitled to live in the way that works best for us.

This isn’t an oppressive society in the Middle East — this is a land that offers us the ultimate privilege of freedom and choice to live our lives however we choose.  If it doesn’t work for you, don’t do it — but I am tired of the criticism of women who choose to live their lives in ways that may contrast what’s culturally popular or “politically correct.”

From the pages of almost any woman’s magazine, you will see bright statements about being proud, reaching your goals and being the best you can be. Apparently, this doesn’t include women whose lives don’t reflect what modern feminism claims is “right.” (Marie Claire tweeted this.)

I’ve read a lot of Christian-based and non-Christian-based books on what makes marriage work and how you should approach it. Whether there’s a Bible verse attached or not, both members of the relationship must make submissions to one another.Otherwise you’ll be in a marital hell bubbling with selfish aspirations.

In the passage above, Cameron says, “I quickly learned that I had to find a way of honoring his take-charge personality.” Any of you married ladies ever have to find a way to honor personality traits of your husbands that are difficult (not wrong or immoral, but difficult)? Think your husbands have had to do with the same with yours? Yes. Unfortunately, people simply dislike the framework Cameron presents it in.

As Cameron explained, “it’s meekness, not weakness.” Meekness is that act of being strong enough  — and humble enough — to surrender your desires for that of someone else. And in case you didn’t know, God calls EVERYONE to be meek, including those pesky husbands.

In his best-selling book, “The Meaning of Marriage,” Timothy Keller writes:

“Paul writes, controversially, that wives should submit to their husbands. Immediately, however, he tells husbands to love their wives as Christ loved the church and ‘gave Himself up for her,’ which is – if anything – a stronger appeal to abandon self-interest that was given to the woman…each partner is called to sacrifice for the other in far-reaching ways.

Whether we are husband or wife, we are not to live for ourselves but for the other. And that is the hardest yet single most important function of being a husband or a wife in marriage.”

What’s my point? Being a “submissive wife” is something that really only makes sense in context — and if both parties understand and agree with one another about what that really  means. Anyone can twist or abuse the verse but if understood correctly,both parties will put the other’s best interest first and sacrifice their selfish desires for their partners.

The reality is, not every situation or argument has a tidy ending. Sometimes, one person in a marriage must let go of their “right” — or every marriage would fail. If the verse is taken correctly, both parties have an equally strong voice in the context of what God calls for.

So, what if you don’t believe in the Bible or if you are not a Christan? Then, feel free to disregard all this talk. Run your relationship however you choose — that’s your perogative and I will not criticize you for it! However, take a minute to recognize that — if we are all to be supportive of other women and their choices — that includes the choices that don’t always jive with our personal beliefs (within reason, of course.)

If a woman like Cameron speaks honestly about her marriage — and gets nothing but criticism from the larger female community — what does that say about that community?

In the words of Rihanna (great, right?), “So live YOUR life.” And let others live theirs.

Cameron Instagrammed this pic after the outrage surfaced, with the caption, “Nothing weak about this, people talk about what they don’t understand.” 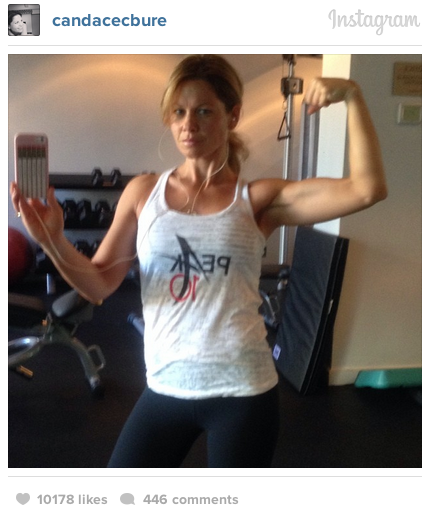 Get more from Ericka Andersen at her personal blog, The Sweet Life and follow her on Twitter.