What Happened To “Obamacare”?

Next post
The Imperial Google: "Do As We Say, Not As We Do"

What Happened To “Obamacare”?

by Ruthie Thompson in Headlines 7 Comments

You’ve heard him! Obama on the campaign trail endlessly touting “Obamacare”. Obama in the debates and in his countless interviews praising what he believed to be his greatest accomplishment so far, Obamacare! Remember the free I LOVE (heart) Obamacare stickers that came out during the last campaign? Obama was proud of the name even going so far as saying at a stop in Iowa last October, “We passed Obamacare.. yes. I like the term… we passed it because I do care and I want to put these choices in your hands where they belong.” Everywhere we turned, Democrats were hailing Obamacare! 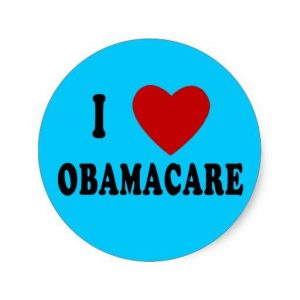 Yes, it’s true that we on the right were also taunting Obamacare. I say taunting because unlike those on the left, we did not see this humongus takeover of our economy and health care system as something to be proud of. We saw it for what it was – a mess, a disaster and a trainwreck. We have continuously hammered the name Obamacare in order to make sure it was pinned appropriately to not only Obama, but to those that supported it and voted for it as well.

So where did “Obamacare” go? In Obama’s apology press conference that he held on November 14th, Obama took Obamacare out of his speech. Interesting.. it may have been a teleprompter malfunction or the blame of his speechwriter, but Obama referred to his greatest piece of work 12 times calling it, The Affordable Care Act – and didn’t mention Obamacare one single time.  In fact, Nancy Pelosi on Meet the Press Nov. 17th, appeared to have corrected David Gregory when he asked if,  “.. Democrats won’t lose seats next year over Obamacare?”. Pelosi responded with much emphasis on the words Affordable Care Act saying, “I don’t think you can tell what will happen next year, but I will tell you this – Democrats stand tall in support of the Affordable Care Act”.  Pelosi referred to the ACA throughout this interview on Meet the Press as if to shy away from the term Obamacare.

I’m wondering how long it will take them before they change their Facebook page from Obamacare to the Affordable Care Act. Regardless, the Left appears to be running from it. Recently, Obama claimed that he will need to “rebrand- remarket” Obamacare. Is this how he plans to do it?

It’s obvious that President Obama and his colleagues are taking a hit from not only the launch of the failing healthcare website, but the rising costs of premiums and the higher deductibles as well. The millions of cancellation letters are coming in droves and Democrats up for reelection are in a whirl right now scrambling to find some kind of help in this spiraling spin that Obamacare has created for them. Therefore they are running. Running from the term Obamacare. trying to fend off the devastation that they will be hit with in the midterm election.

Should we save them? Should we DELAY the inevitable? I’m thinking maybe not.. or not so fast anyway. Maybe it’s time to give them what they not only supported but also what they voted for. If they didn’t read the bill before they voted for it and supported it, then they should be fired. Maybe it’s time to give them the full dose of “Obamacare” or the Affordable Care Act as they like to refer to it now. Personally, I can’t find anything affordable about it so I shall continue to call it Obamacare.