Ah, here we are, MLK Day weekend, or as POTUS likes to think of it, the “First President’s Day Weekend” of the year since we’re supposed to worship him at the altar weekly. The minions are chanting as their Saviour shall reclaim his throne, the kids have a three-day weekend, and ironically, sales and cerermonies abound.

And so it goes, after last year’s controversial “Hit the Road, Barack” cover when there was a glimmer of hope that the strange suction cup shot heard ’round the world wasn’t that of our collective checkbook being siphoned, but Newsweek removing the helmet that is Prezbo’s ass, they follow up with this eerie frontispiece: 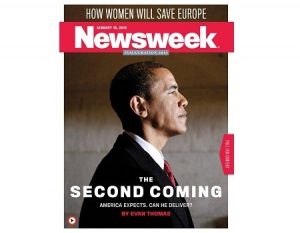 Dafuq? I’m guessing this means we should stop and smell the awesome. Can you smell it? Smells like iwonagain. Aahhhhhhhh…….Creep.

So, in a time when there are injured troops who can’t get home because the Army can’t afford flights, when the minions are paying markedly higher taxes, and America has yet again seen a record high number of those on food stamps, we’ve just paid $7-million for POTUS’ Christmas jaunt and will toss in a couple millions more  for the re-crowning.

Why is that not an issue for the hangers-on of Il Presidente’s coattails? Soy esperando……… Nothing’s too good for The King, it would seem.

I suppose, though, that I shall have to skip the Regurguration as I’ve an entire season of Game of Thrones to watch and laundry to fold. Darn it.