Tuesday we brought you the second James O’Keefe undercover video exposing the Clinton campaign’s shadow operatives discussing methods to commit mass voter fraud, admitting they’ve been at it for fifty years, stealing votes from you and I in an attempt to tilt close elections in the Democrats’ favor. Today, while more of a snippet of his undercover work than the previous two sixteen-minute videos, O’Keefe’s Project Veritas has released its third video, this time exposing a plan to incite bullying of women operatives at Donald Trump rallies. Watch:

Now I’m a personal responsibility gal, and reacting violently to an agitator egging you on is your responsibility. That said, not only do these cretins not care about the safety of rally attendees and their own astroturf protesters, as the previous videos exposed, they don’t care if their women plants are harmed, either. The ends justify the means, apparently.

END_OF_DOCUMENT_TOKEN_TO_BE_REPLACED 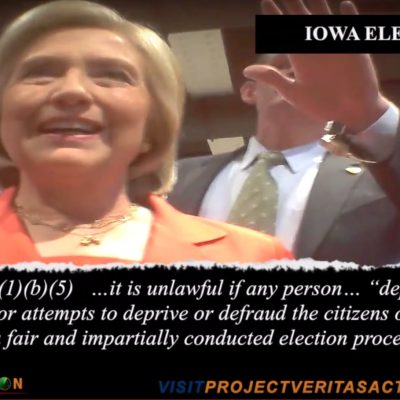 Hillary Clinton was right to be worried about Project Veritas and James O’Keefe. A report came out last Friday from the Clinton campaign that they were alerting…