Yesterday, it was announced that three upstanding personages were arrested in Brooklyn. Why is this news? Well, they are the latest crop of misguided children who’ve decided to follow the Pied Piper of Evil that is ISIS. Fox News Edmund DeMarche reports:

If you look at their ages and their pictures, you’d say – they aren’t children! 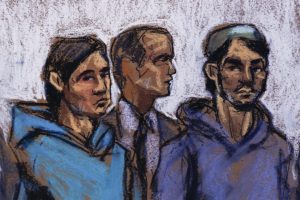 Well, yes they are. Anyone who decides to blindly follow a path to destruction is a naïve child. Juraboev and Saidakhmetov are indeed children who were led by Habibov, who somehow had the means to fund their overseas excursion, and all the ISIS players who they’d been communicating with online. Yes, they all three willingly walked into the clutches of one of the most evil Pied Pipers we are dealing with today. ISIS. DAESH. They are one and the same, and they are indeed evil.

END_OF_DOCUMENT_TOKEN_TO_BE_REPLACED

Welcome to a new weekend post here on Victory Girls, Saturday’s Story Sequels. This is the post where we will provide updates to stories previously covered here…

END_OF_DOCUMENT_TOKEN_TO_BE_REPLACED

Shannon Conley is going to have a lot of time to be sitting and thinking about how she got to this point in her very short life….