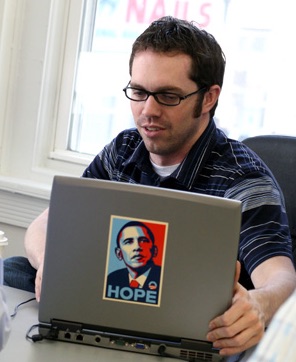 I’m betting Barack Obama, the guy who claims he doesn’t want to influence Israel’s upcoming election by meeting with Benjamin Netanyahu during his scheduled address to Congress in March—which, of course, is just the feeble excuse of a hypocrite— would like to bury this little golden nugget: Jeremy Bird, a field director for Barack Obama’s presidential campaigns—he also worked on John Kerry’s presidential campaign, founded Battleground Texas, and consults for Ready for Hillary—is reportedly in Israel with a group of four other Americans attempting to, yep, influence Israel’s elections by bankrolling opposition. From Independent Media Review Analysis:

Haaretz reporter Roi Arad revealed in an article in the Hebrew edition today that the foreign funded organization, “One Voice”, is bankrolling the V-2015 campaign to defeat Binyamin Netanyahu’s national camp in the March 2015 Knesset Elections.

One indication of the generous financing is that it has now flown in a team of five American campaign experts (including Jeremy Bird, the Obama campaign’s national field director) who will run the campaign out of offices taking up the ground floor of a Tel Aviv office building.

V-2015 is careful not to support a specific party – rather “just not Bibi”. As such, the foreign funds pouring into the campaign are not subject to Israel’s campaign finance laws.

Well, how convenient. The very party operatives that created Barack Obama, the same party operatives that continuously screech about foreign money influencing our own campaigns, are careful not to back a specific candidate in order to…circumvent the campaign finance laws of a foreign nation. Its hypocrisy knows no bounds.