Obama’s been busy the last 10 days.  He enjoyed some down time in Palm Springs, celebrated Valentines Day without his wife, and played a few rounds of golf. 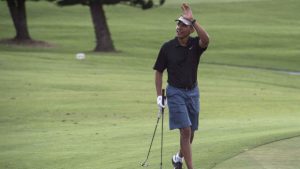 Once he returned to DC, Obama teed off a summit geared towards dealing with all the chatter about Islamic extremism. During this summit that we discover that terrorists have grievances, a jobs program will really really stop youngsters from joining terrorist organizations, we haven’t run profiles on violent extremist’s, and the GOP rhetoric against radical islam is one of the root causes of all our troubles. Time’s Michael Scherer reports on Obama’s newest tactic:

Those who identify the black-clad extremists with their religious roots, the commander-in-chief argued repeatedly, are peddling a “lie” that will drive recruitment by the nation’s enemies and ultimately hurt U.S. interests. “These terrorists are desperate for legitimacy. And all of us have a responsibility to refute the notion that groups like ISIL somehow represent Islam, because that is a falsehood that embraces the terrorists’ narrative,” he said, using the U.S. government’s preferred acronym for ISIS, which is also known as the Islamic State.

But he did not stop there. A day after talking about the “debate in the press and among pundits” over terminology, he accused others in the public sphere Thursday of aiding the terrorist cause by highlighting the connection between Islamic teachings and Islamic State’s tactics, which include rape, beheadings, crucifixions and slavery. “That narrative sometimes extends far beyond terrorist organizations,” he continued. “That narrative becomes the foundation upon which terrorists build their ideology and by which they try to justify their violence, and that hurts all of us, including Islam and especially Muslims who are the ones most likely to be killed.”