Who wants a delicious cupcake in exchange for a couple of bucks that will help a Vet?

Not Michelle Obama and her ridiculous and unsuccessful attempt to force people to eat exactly what she deems acceptable.

“When Waccamaw Middle School students began a campaign to raise money to send a World War II veteran on the region’s final Honor Flight to Washington, D.C., they turned to the kitchen. They baked cupcakes and cookies and sold them at lunch as part of the effort that raised $2,500 in just over three weeks.

This year, that strategy won’t fly.

Remember, Michelle Obama wasn’t elected to any office, or has any authority to create law.  But she is intent on RULING.  As long as it doesn’t apply to HER children or her life.

I don’t understand why FUNDRAISING has to be the victim of Michelle Obama’s zeal for control.  Every delicious cupcake I’ve made for fundraising didn’t come from the taxpayer pocket.  They came from my kitchen and it helped fund many a school related project or trip or  charity.  It’s bad enough she’s waved her heavy handed royal Obama scepter over cafeteria menus, but fundraising???  Isn’t the whole point of bake sales and candy sales to raise money for events, equipment, charities, etc. OUTSIDE of government funding?

“Eat Smart, Move More, a nonprofit that focuses on obesity in South Carolina, has been fielding calls about the Smart Snack rules for weeks, said Coleman Tanner, its community coordinator. “One of the biggest questions we get is about fundraising,” she said. “That’s where most of the push-back comes from.”

The nonprofit points to districts in Clarendon and Anderson counties that moved away from food-based fundraisers long before the new standards. “There are a lot of alternatives,” Tanner said. Book fairs, plants, greeting cards and wrapping paper are among them.”

Who wants a delightful chocolate bar delivered to your door by an adorable kid raising money for a field trip or new band equipment when you can buy a….plant?

Regular people to Michelle Obama:  people will always love cupcakes, candy, and other ridiculously delicious treats.  And they’ll pay good money for them.  People have figured out that selling these treats can fund a lot of really great projects.  Like sending WWII Vets on an Honor Flight.  Not that you’d care, but most people like the idea that you can help a Vet AND have your cake and eat it too.   And most people can control their cupcake habit.  If they can’t, guess what?  It’s NOT YOUR BUSINESS.

I haven’t quite figured out Michelle Obama’s obsession with controlling what Americans eat.  I do know that people who can’t control themselves tend to try to control others. 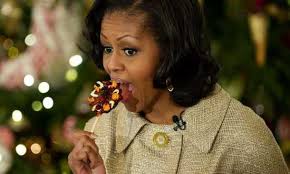 The First Lady’s “Let’s Move!” program has had a lot of publicity lately.  We have strange videos of the president and vice-president taking laps around the White…

END_OF_DOCUMENT_TOKEN_TO_BE_REPLACED

The White House, ever conscience of promoting Michelle Obama’s hectoring of what our kids should eat through “Let’s Move“, thought they were pretty clever by creating a…