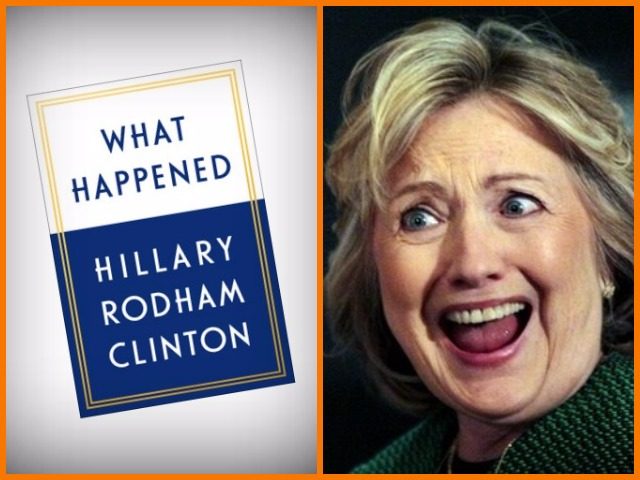 Hillary Clinton’s latest memoir “What Happened” will be released on September 12, 2017 by Simon & Schuster. Naturally, to try and drum up some interest among her faithful lemmings, Simon & Schuster has begun releasing tasty morsels. So far, the 512 page book seems to be 512 pages of whining and blaming. ABC News filed the following report:

What is stunning about the ABC audio excerpt from “What Happened” is listening to Hillary Clinton, who ain’t exactly a young chick-a-dee, display a complete lack of self awareness. I gathered this book excerpt from TheCut.com:

“I don’t have all the answers and this isn’t a comprehensive account of the 2016 race. That isn’t for me to write. I have too little distance and too great a stake in it. Instead, this is my story. I want to pull back the curtain on an experience that was exhilarating, joyful, humbling, infuriating and just plain baffling. Writing this wasn’t easy. Every day that I was a candidate for president, I knew that millions of people were counting on me and I couldn’t bear the idea of letting them down. But I did. I couldn’t get the job done. And I’ll have to live with that for the rest of my life.”

Hillary Clinton is so noble, so giving, so altruistic. She wasn’t doing it for herself. It wasn’t about her. She will have to live with the fact that she let down millions of people. We need Evita Peron singing “Don’t Cry for Me, Argentina” here.

In the second Presidential Debate, Donald Trump “loomed”. Also, from The Cut.com:

“This is not OK, I thought. It was the second presidential debate, and Donald Trump was looming behind me. Two days before, the world heard him brag about groping women. Now we were on a small stage and no matter where I walked, he followed me closely, staring at me, making faces. It was incredibly uncomfortable. He was literally breathing down my neck. My skin crawled.”

“It was one of those moments where you wish you could hit pause and ask everyone watching: ‘Well, what would you do?’ Do you stay calm, keep smiling and carry on as if he weren’t repeatedly invading your space? Or do you turn, look him in the eye, and say loudly and clearly: ‘Back up, you creep, get away from me! I know you love to intimidate women, but you can’t intimidate me, so back up.’”

Oh, Lort! Where does one begin to pull this thing apart? Looming. Donald Trump was looming. Where did Hillary get the “looming” meme. It started on the night of the 2nd Presidential Debate. From ABC News right after the debate, in an article “Second Presidential Debate: 11 Moments that Mattered”: