In a move that should not escape the attention of the American public, Obama (Yes, POTUS himself) met with the head of the Internal Revenue Service Union (National Treasury Employees Union or NTEU), Colleen Kelly which strongly backed Obama’s re-election. Another interesting fact  is that Ms. Kelly’s presence became much more common place at the White House after the passage of Executive Order 13522 which gave NTEU a huge boost in the involvement in the day -to-day operations of the IRS. Hat tip to American Spectator‘s Jeffery Lord who uncovered the White House Log connection between POTUS and Ms. Kelly, who is referred to in multiple articles as the head of an “anti-Tea Party union”-are we starting to see some connections here? 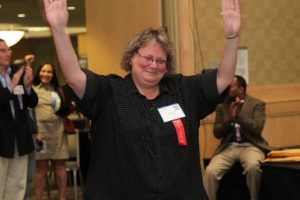 NTEU raised just over a half million dollars, all of which was spent to support Federal level Democrat candidates and that alone wouldn’t be a problem. The problem started when Ms. Kelley opened up a special program targeting Tea Party groups who were applying to the IRS for 5013c3 or 501c4 status-the day after her meeting with Obama himself.