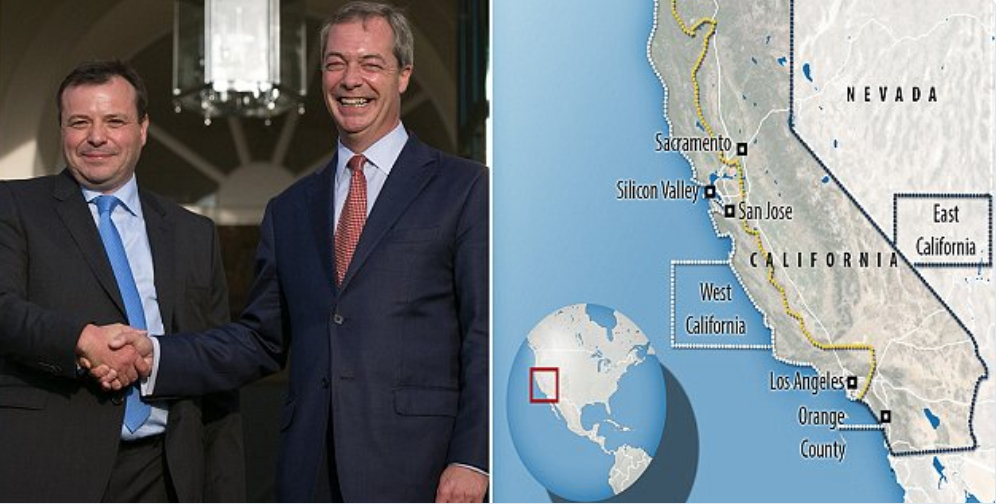 California is a train wreck. And for several election cycles now, the idea of splitting it into two states has been batted about, but has never really gained much traction. And most recently, following Donald Trump’s win last November, some in the state are pushing full-blown secession from the union (and we know what happened the last time we tried that.) But now, a solution to iron-fisted progressive rule in the state is making some headway, and at least two heavy-hitters are backing a Dear John break-up of the Golden State: Nigel Farage and Arron Banks.

Farage and wealthy Leave.EU backer Aaron Banks, the self-styled ‘bad boys of Brexit’, have been recruited by Republicans to lead the push for a referendum during the US midterm elections in 2018, reports The Sunday Times.

Their goal is to pit the rural east of California, which is more likely to vote Republican, against the ‘liberal coastal elites’ of the west coast including L.A. and San Francisco.

With nearly 40 million people, California has 55 electoral college vote[s] – more than any other US state – which have went to the Democratic presidential candidate at every election since 1988…

The pair were recruited by political strategist Gerry Gunster and Republican Scott Baugh.

Nigel Farage (I love saying that name out loud!), as you may know, was the biggest champion behind the UK’s “Brexit” from the European Union. And if there’s anyone who knows how to convince voters, it’s Mr. Farage.

So how might West and East California look? And is the plan even viable, particularly given 365,880 signatures are needed to get the initiative on to a ballot?