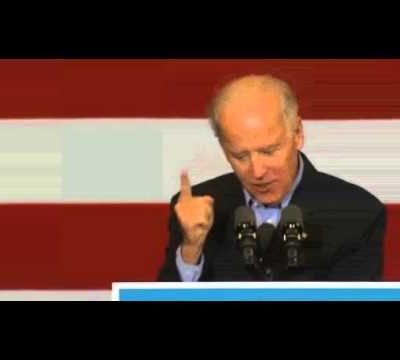 Previous post
Joe Biden Gaffe-tastic: "There's never been a day in the last four years I've been proud to be his Vice President."

Obama wants you to Vote for Revenge, Romney for Love of Country; and Saturday Links!

Obama wants you to Vote for Revenge, Romney for Love of Country; and Saturday Links!

Hopeychangey no more. The following video demonstrates precisely the reason why Romney will win. He understands the greatness of America; it’s in his DNA. And Obama? Once lofty and grand about “hope and change”, now seems utterly petulant, divisive, and an ungrateful brat.


Romney and Obama in their own words

And frankly, I actually really love what Mitt Romney says later in that same speech; it makes me hopeful again.

“This is a time to come together as a people,” Mr. Romney said. “We have had some long days and some very short nights and the the door to opportunity is open and we are going to talk though it. Come walk with me, walk together to a better place.”

Kick Obama and his thuggish ways to the curb, people. Vote Romney/Ryan 2012.

The Other McCain has been on the road in Ohio doing a lot great blog posts. It’s hard to pick just one but the All Star Mitt Romney Rally is special and has terrific pics from Ali Akbar.

Teach at Pirates Cove has the blog post with the best title: “Sorry Nancy P, That Gavel Won’t Be Coming Your Way”. Thank God! 🙂

A comprehensive blog post on Voter Fraud Alert is what Nice Deb is blogging about today. Go read it.

Professor Jacobson over at Legal Insurrection has more on the never ending saga of Elizabeth Warren and her “Native American Heritage”. Heh!

This Aint Hell, my favorite mil-blog, is doing what they do best; they have blog post up today exposing yet another imposter/infiltrator.

Jim Hoft at Gateway Pundit has up a video ad released by Navy SEALs that simply BLASTS Barack Obama.

Aunty Brat has up an interesting post on the Canadian Veterans’ fight against their own government on her blog, Assoluta Tranquillita.

Michelle Malkin has up a great pictorial on “Poser of the United States: The photo-op presidency”. We all know who THAT’S about.

Instapundit highlights the mysteries of Benghazi. Did you know that not only is Tuesday, November 6th, election day but it is also the 8-week anniversary of the Benghazi terrorist attack?

Neo over at Neo-Neocon has up a great blog post on “Looking backward at the Obama campaign: August 22, 2012′. It’s pretty fascinating actually. Go check it out.

and finally, Gay Patriot has a post up on how Obama only exacerbates our country’s divisions.

This is our last weekend before we fundamentally change BACK our country. Work hard for conservative candidates, pray hard that folks do the right thing, and go vote!