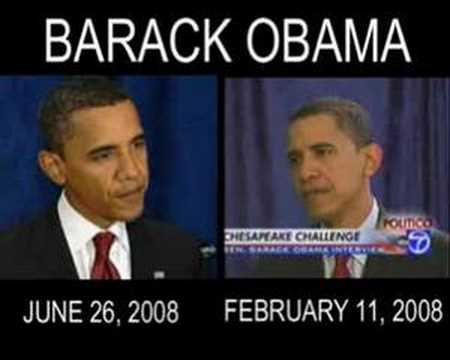 Obama has a history of being ardently against guns. For example, look at this questionnaire he filled out showing us his anti-gun agenda from the Politico:

Of course, now that the DC handgun ban has been overturned, Obama’s singing a different tune. He wants us to believe that he just loves the Second Amendment, and would never want to take guns away from honest Americans! Unfortunately for him, though, not everyone’s sipping the Obamamessiah Kool-Aid. He seems to think that everyone is so enamored of him, that they won’t bother looking at what he’s said in the past.

Take this video from Hot Air, for example:

See, in today’s politics, there’s this newfangled thing called the internet. It means that millions of Americans are able to do their own research, separate from the biased and shoddy reporting done by the mainstream media, and that your ultra-liberal background won’t just quietly fade away with no one the wiser. If you’re the most liberal Senator in Washington, we’re going to know about it. But of course, what can Obama do except lie about where he stands? He has to run on an empty vehicle of HOPE! and CHANGE! because if Americans knew just how liberal he really is, he knows he’d never win. So it’s spin, spin, spin for Obama.

So when it comes to guns, what’s the answer for Obama? That he was for the unconstitutional handgun ban in Washington, D.C. before he was against it? Sorry, buddy. That didn’t cut it in 2004. And it’s not gonna cut it now.