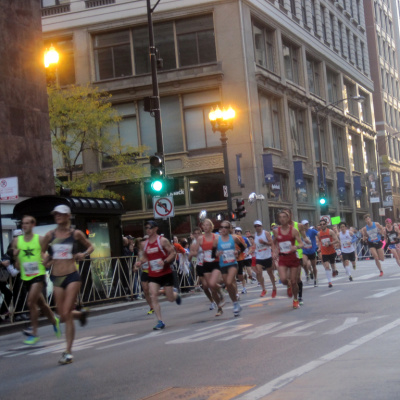 The Chicago Marathon takes place this coming Sunday. An amazing 40,000 runners are expected to participate in the Bank of America Chicago Marathon. One participating category has its collective running shorts in a wad. The nonbinary runners believe their inclusion was exclusionary because a major announcement was not made about the category. Ladies and gentlemen, please behold the Participation Award recipients of the late 90’s. Some of y’all didn’t scream loud enough about this piffle at the time.

Fox News reported on the hurt feewings from the nonbinary community over this perceived slight:

Some Chicago Marathon runners are feeling a little blue heading into this weekend’s race.

One of the biggest events of the year for the sport followed Boston and London with the creation of a nonbinary division for runners who don’t identify as male or female. The lack of hype around the new inclusive division left some of those who identify as such with a bad taste in their mouths.

What did they want the organizers to do? Maybe dye the Chicago River multi-hued and have buglers sounding off on the steps of town hall while the announcement is read? The nonbinary marathon runners are feeling a way because they don’t feel heard or seen. They don’t feel celebrated. Excuse me while I go get a tissue to dry my eyes. Fox News further reports:

“Personally, it feels hurtful because it feels performative, or brushed under the rug, because it really is a big deal,” Cal Calamia told the newspaper, adding they were “excited” to compete in their hometown.

“As a trans athlete, showing up and registering for these races is a hard thing to do, because there’s not usually space,” Calamia told the Sun-Times. “What makes it easier is when big organizations with a lot of power say, ‘We’re adding this category, and we’re proud of it, and we’re doing what it takes to celebrate these runners who are now being invited to our event.”

Consarnit. Now I am confused. Trans people are, by definition, binary. Nonbinary has no definition by definition. Of course, they change the meaning of words every hour so who knows. In this video tran runner Jessica discusses not being able to run in the male or female categories because of transitioning:

Gonna put the bottom line here. I have always believed a lot of this gender identity mishegoss is about people who want to feel special and bully the rest of us. They must bully us into following their rules and language guides, or else.

Our President is discussing Armegeddon weakening our Nation. Our Southern Border is invaded and our social safety nets are stretched beyond what they were ever made to do. Our kids can’t read or add at grade level. Non-binary people want to kvetch because the announcement was big enough. Their inclusion was exclusionary.

You’ve had your participation trophy. Now grow up.