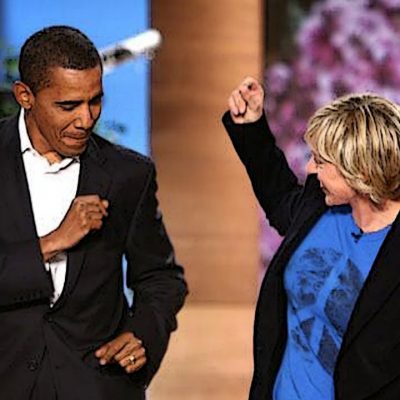 Change you can believe in: Obama is PRO baby murder

Next post
son of promise, child of hope? oh puke

Change you can believe in: Obama is PRO baby murder

by Cassy Fiano in Headlines 18 Comments

Obama tries to paint himself as a pro-choice moderate, which of course, he isn’t. An explosive story has broken showing just how radical he truly is. Not only is Barack Obama pro-abortion, he actively campaigned against a bill giving babies who survive abortion and are born alive protection. I guess he thinks it’d be all right to just kill the suckers, huh? Not even NARAL sinks this far:

In 2000, the Born-Alive Infants Protection Act was first introduced in Congress. This was a two-paragraph bill intended to clarify that any baby who is entirely expelled from his or her mother, and who shows any signs of life, is to be regarded as a legal “person” for all federal law purposes, whether or not the baby was born during an attempted abortion. (To view the original 2000 BAIPA, click here.)

In 2002, the bill was enacted, after a “neutrality clause” was added to explicitly state that the bill expressed no judgment, in either direction, about the legal status of a human prior to live birth.

(The “neutrality” clause read, “Nothing in this section shall be construed to affirm, deny, expand, or contract any legal status or legal right applicable to any member of the species homo sapiens at any point prior to being ‘born alive’ as defined in this section.”)

The bill passed without a dissenting vote in either house of Congress. (To view the final federal BAIPA as enacted, click here. To view a chronology of events pertaining to the federal BAIPA, click here.)

Meanwhile, Barack Obama, as a member of the IL State Senate, actively opposed a state version of the BAIPA during three successive regular legislative sessions. His opposition to the state legislation continued into 2003 – even after NARAL had withdrawn its initial opposition to the federal bill, and after the final federal bill had been enacted in August 2002.

When Obama was running for the U.S. Senate in 2004, his Republican opponent criticized him for supporting “infanticide.” Obama countered this charge by claiming that he had opposed the state BAIPA because it lacked the pre-birth neutrality clause that had been added to the federal bill.

NRLC and other pro-life observers have always regarded Obama’s “defense” as contrived, since the original two-paragraph BAIPA on its face applied only after a live birth; the “neutrality clause” added in 2001 merely made this explicit, and therefore the new clause did not change the substance of the original bill.

Moreover, the overwhelming majority of liberal, pro-abortion members of the U.S. House of Representatives did not embrace the initial NARAL position that the original bill was an attack on Roe v. Wade. The Democratic members of the House Judiciary Committee, then as now, were a solidly liberal group, yet only one of them voted against the original BAIPA without the “neutrality clause,” and he cited a different reason.

Congressman Jerrold Nadler (D-NY), who supported the bill, and who described himself as “as pro-choice as anybody on Earth,” argued that under his understanding of Roe “if an abortion is performed, or a natural birth occurred, at any age, [even] three months, and the product of that was living outside the mother, and somebody came and shot him, I don’t think there’s any doubt that person would be prosecuted for murder.”

The documents prove that in March 2003, state Senator Obama, then the chairman of the IL state Senate Health and Human Services Committee, presided over a committee meeting in which the “neutrality clause” (copied verbatim from the federal bill) was added to the state BAIPA, with Obama voting in support of adding the revision. Yet, immediately afterwards, Obama led the committee Democrats in voting against the amended bill, and it was killed, 6-4.

The bill that Chairman Obama killed, as amended, was virtually identical to the federal law; the only remaining differences were on minor points of bill-drafting style. To see the language of the two bills side by side, click here.

There’s no getting around this. Obama knew the language in question was in the bill, because he himself added it. Obama voted for infanticide and then tried to cover it up, probably when he realized how wildly unpopular this would be with voters (duh, you moron). I wonder how he’ll try to get around this one… probably using a lot of “uh’s”, “um’s”, and “you know’s”.

It’s one thing to be pro-abortion. That, at least, is debatable. However, if a child somehow survives an abortion and still has a heartbeat, then there is no way it should ever be permissible to kill that child. The pro-abortion argument centers around a woman’s choice to do with “her body” what she chooses. But if the child is expelled from her body, and is still alive, it’s no longer her choice to make. That is a living, breathing human being, and to extinguish that life would be murder. I don’t care if you wrap it up in a pretty bow and call it “choice”, because it’s still murder.

This, apparently, was not important to Barack Obama. If he didn’t support this, then what in the hell could he be proposing? That an infant who survives an abortion should just be killed because Mommy doesn’t want him and didn’t get to kill him the first time around? That’s sick. That’s disgusting. Does this man have no moral compass?!

Of course, there are some wonderful examples of his thoughts on children. You know, like the one where he called babies “punishment”:

Barack Obama supports infanticide, partial-birth abortion, late-term abortion, and calls children a punishment. Yet he tries to run on “family values”. What family values? These are not the family values that most Americans would support.

At what point do Obama supporters realize how grossly out of touch he is with everything that Americans hold dear? At what point are all of these scandals, and the radicalism, and the associations with racists, terrorists, and anti-semites become too much? Barack Obama is simply not fit to lead anything, much less the most powerful country in the world.