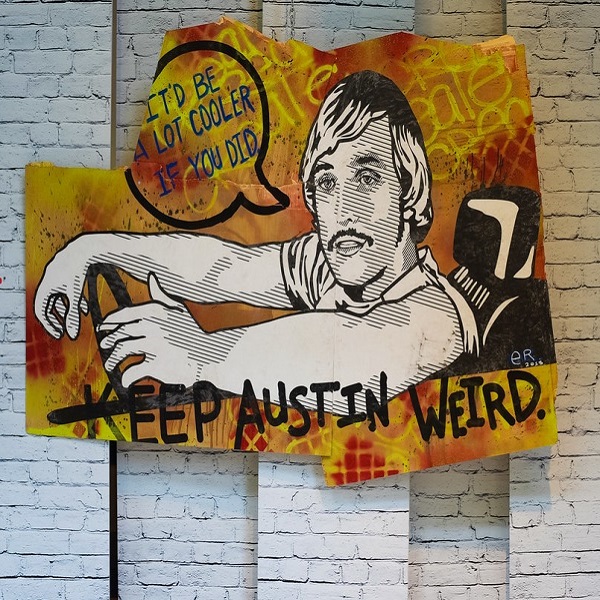 I’m about as close to being a native Austin-ite as you can find these days. My family arrived in 1976, when I was six-years old. I have always called it home, even when I lived elsewhere. Watching Adler destroy my home-town is almost as emotionally charged as watching my parents pass away. At least that was expected.  But realizing that Austin has reached a new grim new homicide milestone is just one of a long litany of ways he is killing this city.  The Austin slogan is “Keep Austin Weird” not “Keep Austin $#i**y”

I left Austin for the hell-hole that is Los Angeles when I was 26.  I wanted to live anywhere other than Austin.  It wasn’t that Austin wasn’t a great place, but I was really young and stupid.  I wanted an adventure.  Boy howdy, did I get one in California.  Living in California was so much fun I have told anyone who asks me about it, “There is not enough gold on this whole freaking planet for me to live there again!”  Hope that clarifies that matter.

You know what the worst part is for me right now?  Right now, there’s not enough gold on the planet for me to live in many, if not most, parts of Austin.  It’s just not safe, on so many levels.  Between the multitude of “tent cities” that continue to fester under our overpasses to the lack of police who can manage the crime, to the new ways in which the police CAN manage either the homeless and criminal activity, I cannot enjoy my Austin the way I used to.

What I love the most about Steve Adler (sarc) is just how well he is able to snow his ridiculously liberal constituents with the party line.  If you click on the below NPR tweet, you can get the transcript, which I highly recommend.  Just be close to the toilet before you do.  It will make you sick.

Adler and ALL the progressive mayors have synced up to create the party line.  From the interview, Adler claims this laughably stupid ignorance:

“Well, I wish we knew exactly what was going on so we could better stop it. One thing’s very clear, though, is that it’s just not happening to us. It’s happening all around the country. As I talk to mayors, it almost feels like everybody is dealing with the same thing. So there’s something that’s going on that cuts across local policy decisions because it’s happening everywhere. I wish I knew better. In Austin, it appears as if a lot of the violence that we’re dealing with now is related to guns. So we’re focused on that right now with our law enforcement folks.”

Did you hear that?  “I just don’t know HOW this happened??”  Hmmm… you really think it’s the number of guns out there?  It couldn’t POSSIBLY be that last August, the Austin City Council UNANIMOUSLY voted for drastic cuts to the APD?  OOOooooh NOOOooo, it couldn’t be that now.  Nope.  Not at all.

One of the first things I did when I read the above article is to call my long time, fruit-n-granola eating, Birkenstock wearing, real-life hippie “second mom.”  She was literally born and raised in Austin.  She used to volunteer many hours of her life to various police-driven community involvement activities in Austin.  Her son used to BE a police officer many  moons ago.  I said to her, “do you believe me NOW when I said they really, really meant it when they said ‘defund the police’.  I had sent her the article above.  Her email back to me:

“I strongly believe there need to be changes in policing nationwide. More than sad in Austin that the community officers are being cut, as well as the park police. Believe community officers should be beefed up tremendously. The strategies they use in the neighborhoods work. Scary that 911 will see a major reduction. You know the ramifications of that. Really upset that crisis intervention is taking a hit, even though it’s only one. Beefing the unit up to take pressure off the street officers would be better, I feel. Amazed at the removal of the gang unit. Wow.

Feel that the City Council possibly has taken a bad road here. You know how I like and respect Art Acevedo, former APD chief, now chief in Houston. Art speaking out against these cuts carries a lot of weight with me.”

But no, Adler says it’s a national phenomenon.  For some nebulous reason he cannot fathom.   Yeah, it’s happening around the country, but it’s ONLY the cities who voted to DEFUND the police or ‘REINVISION the police.  And who runs those cities?  That would be Portland and Seattle and Chicago and New York and Minneapolis and the like.  Hmmm, if those cities sound familiar, that’s where all the BLM and Antifa rioting went on last summer.  In Seattle alone, as of an April article put out by U.S. New and World Report, over 200 police officers quit because of the national protests!  That’s insane!

Look, as I mentioned in my last post, I was a mighty rebellious teenager.  I would sneak out of my house and go spend many an evening on the Bourbon-Street-like strip known as 6th Street.  Full of live music and college kids getting drunk and having a good time.  I wanted to join in the party and did, many many weekends.

I would park at the far end of the street under the over-pass bridge and walk up the 3-4 blocks it took to get to the “better bars”.  It was essentially as safe for me there as my suburban neighborhood.  Police milled about constantly and the road itself was blocked off at both ends with police cars as if to acknowledge “we know you’re being stupid and we are here to make sure the worst thing you suffer is a hang-over.”  I was 16 when I first indulged in my risky behavior.

Just a few months ago, my older sister told me her 18-year old daughter wanted to drive into Austin to go shopping (during the day) by herself on S. Congress.  A trendy new part of the city.  I stated the obvious: “you know you can’t let her do that, right?”  My sister agreed.  I offered to play chaperone, but the fact that an almost-adult young women cannot be sure of her safety during daylight hours is tragic!

I hope we see an end to this nightmare.  Every day I am grateful my husband talked me into moving a little further north.  A different county, a different city.  It took me a few weeks to adjust to the idea.  I LOVE Austin.  I just know I cannot live there as is.

Luckily, it looks like some headway might be happening.  We voted in ONE conservative city council woman.  We voted (months ago) to ban the random homeless people from “camping” any where they damn well please.  Yes, the Council is slow-rolling the process, but we at least got voter’s of all stripes to agree they need to go.  And a new PAC has been established to get more work done for the City.  Save Austin Now is the organization to make sure the homeless camping bill was on the ballot.  They are now tackling other issues that Adler won’t:

I hope one day to be able to drive by my old, wonderfully middle-class neighborhood, that is now full of wealthy liberals from California and not see the ‘faux homeless” at the neighborhood entrance.  I hope one day to feel like I can have a date-night with my husband on 6th Street watching an amazing local band, without the fear of being a statistic.  I hope one day before my niece is too old to care, she can spend the weekend in Austin rummaging all the local thrift stores for the vintage clothes she loves.

Until then, Adler is hell-bent to follow the leaders of San Francisco, Los Angeles, Seattle and Portland.  If that means doubling our homicide rate in the process, well at least we know the Austin Police Department has approved $10,000 per day Critical Race Theory training.  I hope the families of  the murdered victims can wrap themselves in the comfort of that blanket.