57th Anniversary of the Day Rosa Parks Refused to Give Up her Seat and Links!

57th Anniversary of the Day Rosa Parks Refused to Give Up her Seat and Links!

Today is the 57th Anniversary of the day Rosa Parks, the First Lady of Civil Rights, refused to give up her seat on that bus in Montgomery, Alabama. Rosa Parks’ act of defiance that day, and the subsequent Montgomery Bus Boycott, became important symbols of the modern Civil Rights Movement. She became an international icon of resistance to racial segregation. We, at Victory Girls, salute her steadfast courage today. One of our conservative heroes, Condoleezza Rice, posted a wonderful tribute to Mrs. Parks on her Facebook page this morning.

“On this day in 1955, Rosa Parks refused to give up her seat on a bus. That simple action sparked the beginning of the bus boycott and the civil rights movement of the era. Martin Luther King, Jr. said, “The great glory of American democracy is the right to protest for right.” Today, I am thankful for all of those who have gone before us and continue to fight for equal rights, here at home and around the world.”

And on a side note…

Never missing an opportunity for poignant photo ops, the White House released this picture on their Facebook page as well today. It was taken on April 16, 2012. 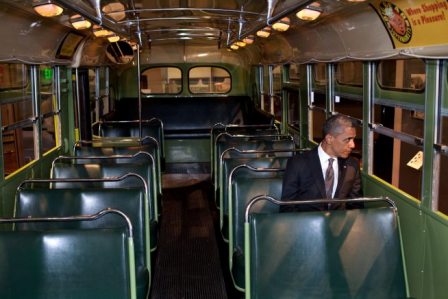 Teach at Pirate’s Cove has a great post up on “WWF Stages Protest At COP18”. Go read it.

The Other McCain is blogging about the Brits in “Fleet Street to Be Neutered?“.

Phineas at Sister Toldjah has a really good Fast and Furious post up — guns found in New Mexico.

Professor Jacobson at Legal Insurrection has up a post on the “Pro-Morsi Rally in Cairo“. Apparently, hundreds of thousands turned out.

Emily at NakedDC is asking what could possibly go wrong in her post “White House proposes solution to Fiscal Cliff that even they propably don’t think is serious”. Go. Read.

The First Street Journal is blogging about the now infamous Rule 5 in blogging — with an awesome twist!

Jammie Wearing Fool has up a great blog post on the riches of UN Ambassador Susan Rice and all her business dealings with IRAN!

Jim Hoft at Gateway Pundit has up a shocking post called “For Sale on Saudi Facebook: Abdul, the Castrated Black Aftrican Slave”. Go read it.

A great post by Jonn on “Women Sappers” at This Ain’t Hell. Don’t worry. I didn’t know what a “Sapper” was either until I read his post. 🙂

Michelle Obama’s Mirror has up “an important message from PBS“. Go Read. Now.

Instapundit has up “HIGHER EDUCATION BUBBLE UPDATE: A Shocking Chart On Tuition vs. Earnings For College Grads”. It includes a great must see chart!

Erika Johnsen is blogging at Hot Air on “Bank of America backs away from new fees; populists rejoice”. LOL.

neo-neocon has up a number of good posts today but the “Nile Gardiner is wrong—”Benghazi bungling” is not a “disaster,” although it should be”, is a must read!

and finally, Andy at AofSHQ has up a “Guns and Hunting Thread” with a lot of good practical safety information. Go check it out.

Have a wonderful weekend!