Imagine being able to glimpse into your parents’ romance, through the most amazing love letters they wrote to each other, long before you were born. How cool would that be? Well, a woman in the UK named Loraine Fergusson, has found 300 love letters between her late parents written during the throes of their courtship at the end of World War II. Theirs is a war time love story with a happy ending.

Loraine, who is an author herself, had been recording her mother’s recollections of the war for about a decade as research for a historical novel she planned to write, when she finally asked to read the letters her mom had long kept private.

“She said they were soppy and might embarrass me, but finally decided I could have them with the promise that I wouldn’t read them or publish them until after she was gone,” 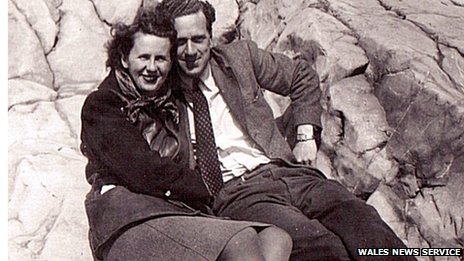 It was 1946. Loraine’s dad, a British surgeon named Brian Thomas, 34, fell in love with her mother, Katie Walker age 23, in Graz, Austria at the end of World War II. Brian had been working abroad with the Royal Army Medical Corps since 1942 and was posted in an Austrian hospital in 1945 where Katie worked as a nurse.

As the story goes, Brian was married to someone else, and about to file for divorce. After it was finalized, the couple were together non-stop for the next four months, taking photos of their daily life together as they fell in love. Brian eventually had to return to Britain and so began 8 months of writing love letters to each other. Enclosed in those letters were often photos of their time together, and pictures of their lives without each other. In those days, most couples didn’t have sex before marriage and Brian and Katie had waited. Loraine says the letters between the two were steamy but beautiful – there was “passion but of a much higher level.”

Here’s a couple of excerpts, first from a letter Katie wrote to Brian on March 22, 1946:

“My dearest darling Brian, Such a sweet letter from you today, four pages of the most wonderful things that were ever said to any loving female and when I was reading it I just felt like crying for sure joy. My bursting point was so terrific that my eyes were quite wet. That’s the effect your letters have on me which proves pretty conclusively but I’m very much in love with you, my darling one, although I’ve never needed anything to prove it. I’ve just always known it deep down in my heart. How could I help but love you when you are all the things I have ever wanted anyone to be?”

“My dearest beautiful lovely darling Katie…Darling, how lonely you must feel. If only I could be there. Sweetest, if it gets too much for you, come home on leave. We’ll meet somehow, even if I have to tell your people that they have the most wonderful sweetest daughter in the world and that I’m going to pursue her until she is finally mine forever! But I’m sure if they could have been a fly on the wall at the Wiesler they’d have no doubts that we two are the happiest and nicest pair on earth.”

After proposing on a moonlit bridge, Brian and Katie finally married in March 1947.

“It was fascinating to read about my mother as a young girl in love. It made me think back to all the times I shouted to her as a teen, ‘You just don’t understand!’ when in fact, she really did understand.”

“When my father slipped into a coma at age 72 after suffering a heart attack, my mother was by his side in the hospital every day. When he opened his eyes and she asked ‘Is there anything you need?’ he said, ‘Only you.’ Those were his last words to her before he died.

“My mother was heartbroken but said, ‘I had 35 wonderful years of that man. I will cry alone but I won’t make everyone else miserable.’

Neat. I love a good love story! Loraine has published many of the love letters between her parents — along with pictures — on her blog called “With Love from Graz“.

Teach at Pirate’s Cove is blogging about “As We Come Into Beach Season, Please, People, Clean Up Your Garbage.” It’s a great post. Go check it out.

The Other McCain has up a bunch of great blog posts including this one by Stacy: “Benghazi and Other ‘Concocted’ Scandals.”

ST at Sister Toldjah has up a post on “Shock: IRS’ own data shows there was no 2010 “surge” in tax-exempt apps.”

Professor Jacobson at Legal Insurrection has up a terrific post today on “Was Celia Roady, who asked the planted question, a victim of the IRS?.”

Kurt at Gay Patriot is asking “Scandal central? Or a whole lot of talk that will amount to nothing?”

Glenn Reynolds or Instapundit has many great posts at his blog hub and don’t forget to check out his work on USA Today!

Emily at NakedDC has a blog post up on “Let’s Talk About Sex.” 🙂

Dana at The First Street Journal has up a really good post called “Why is job creation so slow?” Go check it out.

B5 over at Blackfive has a terrific post up called “Photo Essay: Going for the Gold at the Warrior Games.” The pics are awesome!

Jammie at Jammie Wearing Fools has up a great post on “Gallup: Low-Information Americans Not Paying Attention to Obama Scandals.” Sigh.

This Ain’t Hell has a bunch of great posts up today but I like this one by Jonn called “Magpul & Sheriffs sue Colorado.”

As always, Michelle Obama’s Mirror has up a terrific blog post called “Addition in the Age of Obama (subtraction, not so much).” 🙂

Three Sure Things of Life has up a post called “After-Action Report: Francis Ford Coppola’s ‘Tetro’”. Go check it out!

Ed has a blog post up at Hot Air on “Piers Morgan: Say, I guess government can become tyrannical after all.” Piers is a total dumbass.

and finally, Drew at AoSHQ has up a blog post “Amnesty Supporter Explains How Conservatives Can Appeal To Hispanics. Spoiler: It Involves Unicorns And Underwear Gnomes.” Make sure you read the comments! 🙂