The new video game is called “Bullet to the Head of the NRA”. Yes, it’s seriously called that, it’s graphic, and it’s clearly a big FU to the NRA. 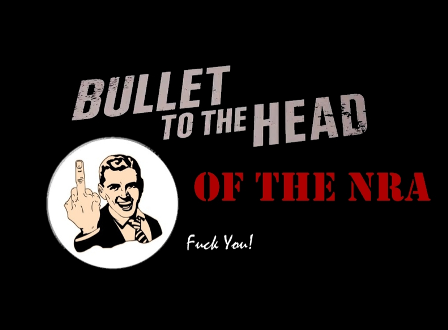 This from Katie Pavich:

“A new online video game is taking political discourse to a whole new level. We already reported the death threats being received by NRA executives and now, a video game which allows users to shoot NRA President David Keene in the head, has been released. The creator of the game identified as gizmo01942 Ediot says, “Share this everywhere, especially gun-nut and anti-game websites. Also see if you can’t send it in to the NRA somehow, like through the feedback on their website or something.” Gizmo also provides screen shots to viewers, which can be seen below.

The game is available for download and comes in the form of a zip file. During a press conference in December, NRA Executive Vice President Wayne LaPierre berated the video game industry for their use of violence saying, “Isn’t fantasizing about killing people all day really the filthiest form of pornography?”

Do the basement-dwelling makers of this game realize they just made the NRA’s point? I bet not. We’ve really become a nation of dumbasses.

It’s OK To Kill People In Video Games, As Long As They’re Men

My latest post from Newsreal: Quick, name the one thing sure to fill a liberal feminist with rage! (OK, well, besides the idea of women choosing to…