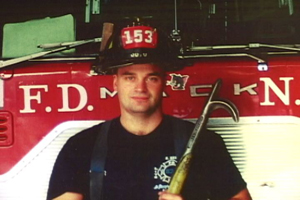 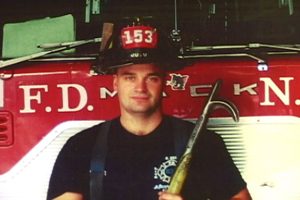 Firefighter Stephen Gerard Siller was one of many heroes to give his life on September 11, 2001. His bravery and dedication to his city and his duty is one of the most amazing stories I have ever read, and he makes me so proud to be an American because his courage in the face of unimaginable terror is what makes Americans so exceptional in this world of darkness and depravity.

On the morning of September 11, 2001, Siller had just gotten off of the late shift at Squad 1, Park Slope, Brooklyn, when he heard on his scanner about the first plane hitting the towers. He had plans to go play golf with his brothers, but he immediately called his wife, Sally, and asked her to call them and tell them he would catch up with them later. He returned to Squad 1 to get his gear.

After picking up his gear, he drove his truck to the Brooklyn Battery Tunnel, but it was already closed. He put on his 60 lbs. of gear, rushed through the tunnel on foot, and then ran from the Tunnel to the Towers, where he died in service to his city and his country.

Stephen’s story doesn’t end at his death. Siller’s family created the Stephen Siller Tunnel to Tower Foundation, and unlike so many charities, nearly 91 cents of every dollar goes to programs and initiatives that were close to Siller’s heart, like Stephen’s House of the New York Foundling, a residential home that provides a temporary haven for orphaned and/or broken teenagers.

The best known event in his name is the Stephen Siller Tunnel to Tower 5k Walk and Run, an event that is held every year in September in New York City, and now around the country, to remember the service and sacrifice of one of our nation’s heroes, a man who rose above duty.