Remember when Nancy “Botox” Pelosi bluntly informed Americans that to understand the Obamacare bill, you have to pass it to find out what’s in it? Well, now we know why. You see, some interesting commentary from one of the principal architects of this healthcare debacle has surfaced. Take a look at this video via Legal Insurrection:

So many laughable statements packed into one 1-minute clip! First off, our Duffer-in-Chief wouldn’t know transparency if it walked up and gave him a Mulligan. Secondly, Gruber’s statements that lack of transparency is a “huge political advantage” directly contradict Obama’s dogged insistence that this Administration is the most transparent ever! Gruber’s full remarks via American Commitment’s YouTube channel:

Got that? He emphatically states the bill was purposely written so the CBO couldn’t score this mandated piece of crap as a tax bill. Not only that, it was planned in such a way to prey upon the “stupidity of the American voter..”  What’s funny in a sad sack sort of way is that he contradicts himself during an interview this summer with Chris Matthews. OUCH

As the country braces itself for the latest and *cough greatest enrollment starting on November 15; the ACA has walked back its projected enrollment figures. Meanwhile, Jonathan Gruber is desperately trying to apologize his remarks. According to The Hill, while appearing on the Ronan Farrow Show, Gruber stated:

“The comments in the video were made at an academic conference,” Gruber said on “Ronan Farrow Daily.” “I was speaking off the cuff. I basically spoke inappropriately. I regret having made those comments.”

But wait! There’s more! A second video has surfaced. And now, he’s scrambling backwards as fast as he can! Meanwhile, Howard “The Scream” Dean isn’t much of a fan of Gruber.

Dean, who was chairman of the Democratic National Committee and a 2004 presidential candidate, called Gruber’s comments “terrible,” and said the healthcare law was put together by people out of touch with Americans.

“The core problem with the law (is) that (it) was put together by a bunch of elitists who don’t really fundamentally understand the American people. That’s what the problem is,” he said.

So, how do we know about all of this? How did we find out that Jonathan Gruber, the architect or consultant who took part in crafting the Obamacare bill said all this? Its all due to an investment advisor named Rich Weinstein. According to Bloomberg Politics:

Weinstein dates his accidental citizen journalism back to the end of 2013 and the first run of insurance cancellations or policy changes. He was among the people who got a letter informing him that his old policy did not meet ACA standards.
“When Obama said ‘If you like your plan, you can keep your plan, period’—frankly, I believed him,” says Weinstein. “He very often speaks with qualifiers. When he said ‘period,’ there were no qualifiers. You can understand that when I lost my own plan, and the replacement cost twice as much, I wasn’t happy. So I’m watching the news, and at that time I was thinking: Hey, the administration was not telling people the truth, and the media was doing nothing!”

Rich started the ball rolling, and now media across all spectrums are digging in and finally doing their job. Goodness, in just a few short days we find out that Gruber thinks American voters are idiots, that the bill was written to disguise that it’s a tax, and that he wrote a comic book about the law! Yes, REALLY: 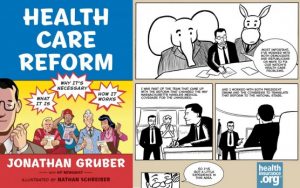 I don’t think Gruber realizes how fast the bus is approaching.  According to Oliver Darcy at The Blaze, Gruber is STILL defending part of his statements:

While Gruber did apologize for his comments on Tuesday, he stressed there was a legitimate reason for designing the health law as a tax bill.

Mark Whittington of the Examiner tell us that Gruber is blaming Republicans for his comments.

However, Gruber was unapologetic about his role in crafting and selling the Affordable Care Act. In a later interview on WGBH in Boston, he laid into Republicans for “trying to confuse people” about the health care reform law. He boasted that the new Republican Congress would not be able to gut the law that much, leaving intact its core provisions such as the health insurance subsidies and the ban on discrimination due to preexisting conditions. At best Congress will be able to alter the law around the edges, such as eliminating the tax on medical devices.

So what we have here is the Obama architect/consultant guru person telling Americans what many of us knew.  Obamacare was built behind closed doors, was intended to tax us like crazy, and this latest brouhaha over his “speak-o” remarks are all the Republicans fault.  You keep thinking that Jonathan; meanwhile you’d better keep an eye out for that bus.  Your transparency and apology of sorts may not be the advantage you think it is.

Everything you need to know about #Liberalism, @TheDemocrats and #ObamaCare in one photo… pic.twitter.com/eD5xZASqVV