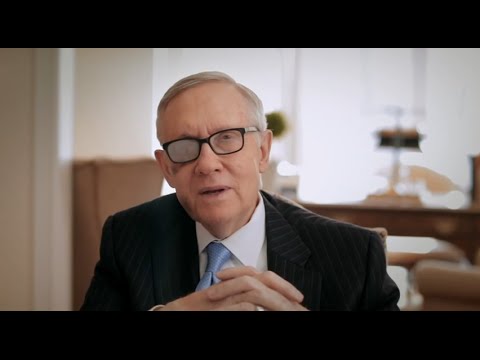 It’s only sad that it’s taken this long, but Democrat Senator Harry Reid of Nevada, current Senate minority leader, announced this morning that he will not be seeking reelection in 2016.

Mr. Reid, 75, who suffered serious eye and facial injuries in a Jan. 1 exercise accident at his Las Vegas home, said he had been contemplating retiring from the Senate for months. He said his decision was not attributable either to the accident or to his demotion to minority leader after Democrats lost the majority in November’s midterm elections.

“I understand this place,” Mr. Reid said. “I have quite a bit of power as minority leader.”

Reid has released a YouTube video explaining his decision.

Appearing with bruises on his face from a recent at-home exercising accident, Reid, 75, said the injury has allowed him and his family to have a “little down-time,” giving him time to think.

“We’ve got to be more concerned about the country, the Senate, the state of Nevada than us. And as a result of that, I’m not going to run for reelection,” the senator said in the video.

Reid, ribbing his Republican counterpart, added: “My friend, Senator McConnell, don’t be too elated. I’m going to be here for twenty-two months.”

Too bad for the rest of us that it’s going to be another 22 months before he’s out.

END_OF_DOCUMENT_TOKEN_TO_BE_REPLACED

Dirty Harry is up to his dirty tricks  and the MSM is silent.. again! When will this story get some attention? Granted, I live in the State…