BREAKING: Miss America Kira Kazantsev was Kicked Out of Her Sorority for Abusive Behavior 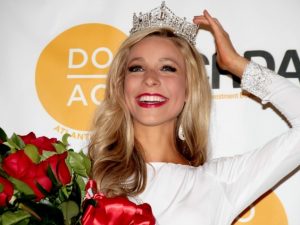 The Miss America pageant already found itself in hot water after it turned out that its newest winner, Miss New York Kira Kazantsev, used to work for Planned Parenthood. It also was discovered that their much-hyped “scholarship fund”… well, it doesn’t really exist. Now more damaging news has surfaced about Kazantsev, and it’s pretty bad. Kazantsev’s credentials included being a graduate at Hofstra, where she was a member of the Alpha Phi sorority. Specifically, she was the Recruitment Committee President. And Kazantsev was kicked out of the sorority after it was discovered that she was abusive to pledges.

Under Kira’s supervision, according to the source, pledges in the incoming class were called names, berated for their perceived physical flaws and imperfections, and made to perform physical tasks to the point of bruising and exhaustion—standard sorority pledge stuff paid forward by a person who our source says was herself brutally hazed upon entry into Alpha Phi.

… A recent graduate who attended Hofstra at the same time as Kazantsev told Jezebel that the final two steps of pledging in one (unnamed) sorority involved making all of the pledges remove their underwear and sit on newspapers while the older members forced them to watch lesbian porn. Anyone whose newspaper stuck to them at the end of the video, the former student said, was branded a dyke, ridiculed, and tossed out. The remaining girls were then forced to perform oral sex on their sorority “big sisters.” Other Greeks required pledges to sit in circles around bowls of cat food and other various inedibles. They’d take turns eating and as soon as someone threw up, they had to eat the puke. Another sorority would wrap completely naked pledges in tinfoil, take them to bars, and instruct them to dance until last call. Patrons would pull pieces of foil off, and pledges were considered sexually up for grabs.

The first part of the allegations, while completely unethical and wrong, are seemingly typical of the hazing that is known to go on in sororities. The second part? That should outrage anyone who reads it. It’s sexual abuse, on top of the physical abuse that was allegedly already being visited upon these women.

The pro-abortion, abusive Kazantsev ran for Miss America on a platform of fighting domestic violence.

Miss America, meanwhile, is standing by their girl.

Kira has been fully transparent with the MissAmerica Organization about her termination from the Alpha Phi sorority. It’s unfortunate that this incident has been exploited to create a storyline that distracts from what we should be focusing on: Kira’s impressive academic achievements at Hofstra University, including earning a triple major from the Honors College and her commitment to serving her community. Kira is an exceptional ambassador for the MissAmerica Organization, and we are excited to be a part of her journey as a force for good across our nation, promoting education and service and working to empower young women.

Because what’s a little abuse among girlfriends, right? That’s empowering, you guys.

This news shouldn’t serve to take down Kazantsev; if anything, it might even be an opportunity for her. Good people sometimes do bad things, and discussing how they happened, how they developed, and how to keep other good people from doing the same bad things could make some kind of dent in a collegiate culture of hazing abuse. Because—to adapt a quote from Kira Kazantsev’s platform—sisterly love shouldn’t hurt.

Liberal “feminists” wanted Carrie Prejean’s head for merely expressing an opinion they disagreed with. But Kazantsev actually abused people — physically and sexually abused women — and Jezebel’s attitude is basically, whatevs. Because as long as you’re a liberal pro-abortion extremist, then who cares what crimes you commit? Yes, good people do sometimes do bad things. However, good people don’t force women to perform sexual acts against their will (you know, that thing called “rape”) or physically abuse other women to the point where they leave bruises. And it is a complete abandonment of what feminism is supposed to stand for. Sure, let’s look the other way when someone is abusive towards women, because they like abortion and are liberal like us! If you still had the inkling that these femisogynists are feminists, well… now you know.

This is not who should be representing American women. This pageant is a farce as it is, but if the Miss America organization wants to continue maintaining the pretense of dignity and class, or that they actually give a damn about women, they’ll strip Kazantsev of her crown. There is absolutely no reason that this talentless, pro-abortion, abusive hack should be representing American women.

Most people have been celebrating a new nail polish invented by Undercover Colors, which changes color if it comes into contact with a date rape drug. A…