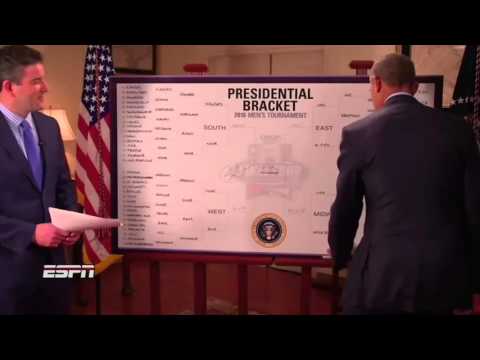 We set aside a Monday around January 15th every year to honor a man whose convictions impacted American history in a way that few people have ever managed. January 15th is Martin Luther King Jr.’s birthday, and we now get a day off from school and mail, banks are closed, and there are multiple retail sales to cash in on the long weekend. (How this honors a man who dreamed of racial equality is beyond me. Maybe because everyone gets an equal shot at no money down on a newly discounted big screen TV? But I digress.)

The coverage kicks off with a feature documenting the outgoing president’s love of basketball, ESPN announced in a press release on Friday. Highlights of Mr. Obama filling out his annual March Madness brackets on ESPN will be included.

ESPN will then air the White House ceremony honoring the World Series champion Chicago Cubs, followed by highlights of other championship teams that have visited Mr. Obama over the years.

Presumably, we’ll be watching a lot of videos like this:


Really, ESPN? It’s a day to honor Martin Luther King, and you’re busy showing off eight years of Obama sports videos? No documentaries recognizing the Negro Leagues. Nothing about Jackie Robinson. Nothing about Kenny Washington, Marion Motley, Bill Willis, or Woody Strode. We can’t even get a crummy dumb report on Colin Kaepernick and how “influential” he is. Instead, we get the Obama tribute. On Martin Luther King Day.