So the saying “inside every tolerant liberal is  a totalitarian waiting to come out” has never rung more true for me than when I saw a little headline on Drudge. It seems that late Friday, a key Democrat on the Federal Elections Commission (FEC) called to regulate Internet campaigns and videos. While this all sounds very “above board” and “reasonable” by their logic, the Republican chairman of the FEC cautioned that instituting these types of regulations on the internet has the potential to affect political blog sites (like this one) and conservative news aggregators like The Drudge Report in addition to regulating free online political ads placed on sites like You Tube.

Under a 2006 FEC ruling free political ads videos and advocacy sites have been relatively free of regulation. Unlike those annoying paid advertisements that appear out of nowhere and start playing on sites like the Washington Post are paid for, whereas the videos that would be targeted are the free You Tube variety like this one for Oregon gubernatorial candidate Dennis Richardson. This was a move by FEC Vice Chairman Anne M. Ravel to add one more log to the fire, so to speak, in the present climate of conservative bashing that has gripped our nation since the present Administration took office.

This also calls to mind the stacks of other “unintended consequences” that these so called “liberals” have wrought on the country in the past six years. Things like the removal of thousands of retirees being stripped of their healthcare by large employers (such as IBM) due to Obamacare, the flood of illegal immigrant children coming across our southern borders this summer, and the inevitable spread of diseases from that allowed mass migration and the following distribution of those children in a perfect pandemic arrangement throughout our nation.

After all, what bad things can come from too much government interference?  Hmm, things like lost emails, trashed hard drives and federal employees running riot over the rights of private citizens who dare to challenge their record of fraud perhaps?

After all, they just want things to be fair, right? Not so much, and Ms. Ravel admits as much.

Because taking away your fellow citizens right to free speech is SO American, and patriotic, isn’t it? The FEC Chairman, Republican Goodman points out that the internet exemption applies only to free, online content, not to TV ads that are posted on the internet. Those are held to the same standards of regulation as the TV ads are. Revel disagrees.

“Blasting the exemption, she said, “Since its inception this effort to protect individual bloggers and online commentators has been stretched to cover slickly-produced ads aired solely on the Internet but paid for by the same organizations and the same large contributors as the actual ads aired on TV,” Ravel argued.”

So, dear reader, here we go again. The Dems are once again, on the wrong side of history and Muppet Sam the Eagle is right-that’s just un-American. 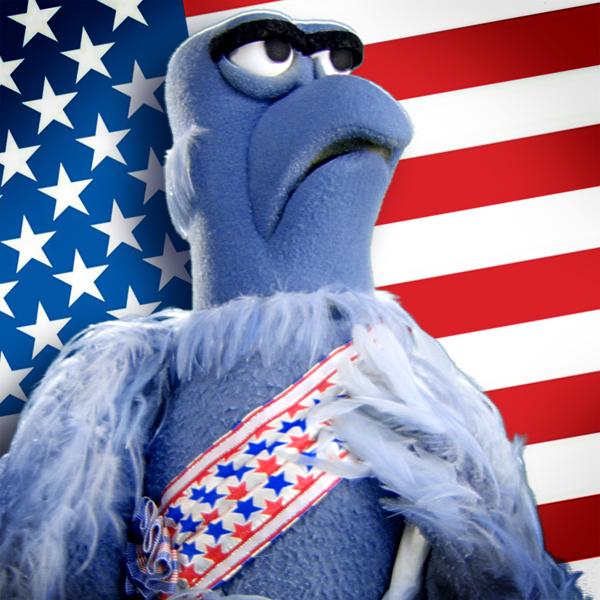