So, right now I’m trying to make my way home from Hawaii. Matt and I are waiting in the terminal, and hopefully it won’t take us as much time to get home as it did to get to Hawaii! Internet connection will probably be spotty over the next few days, but I’ll be back to blogging soon. In the meantime, I figured I’d go ahead and post a few select pictures from the trip. I’ll be posting slideshows from the entire trip later, as well as some interesting little travel stories, like how appalled I was at the lack of respect shown at the USS Arizona Memorial, including from the park ranger who escorted us to the memorial! But for now, you’ll have to settle for a few pictures of me and Matt, and you’ll get everything else later. They’re after the jump — enjoy!

My balcony overlooking the beach at Waikiki at sunset.

Matt and I with some friends at a luau in Oahu.

Meeting some Pearl Harbor survivors — what an incredible honor.

At the USS Arizona Memorial.

Aboard the USS Bowfin, a WWII era submarine known as the Pearl Harbor Avenger. 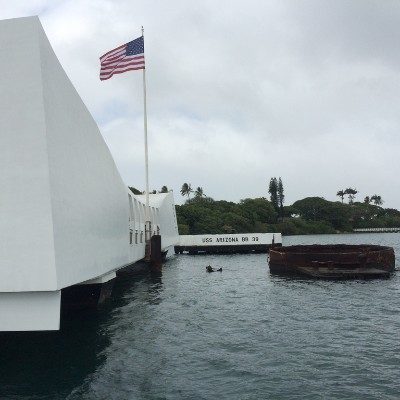