Singer and belly dancer Shakira has long been one of my favorite artists. I love her quirky lyrics, honest singing, and good Lord, that dancing. I took belly dancing lessons so that I could learn to dance more like her.

She doesn’t seem to be too caught up in the Hollywood lifestyle, though. You don’t see her out getting trashed all the time, flashing her girly bits everywhere, or sleeping with every leading man who will look her way.

Now, she’s just given an astounding $45 million to charity!

Colombian pop star Shakira announced a $40 million donation on Thursday to repair damage caused by an earthquake in Peru and a hurricane in Nicaragua.

Shakira is the co-founder of the Latin America for Solidarity Foundation, ALAS, which means wings in Spanish, with Nobel Prize winning author Gabriel Garcia Marquez.

“I’ve seen first-hand many of the challenges facing Latin America,” she said in a statement.

The two-time Grammy Award winner, who started another foundation to help poor children in Colombia when she was only 18, said 40 million infants do not go to school and 51 million people don’t have access to clean water in Latin America.

“These are challenging problems that no one person can address, but working together everyone can help make a difference,” she added.

The ALAS effort for Peru and Nicaragua includes partners like the Spanish Agency for International Cooperation, Telefonica, America Movil and the Red Cross.

It aims to guarantee investments for rebuilding education, sanitation and water systems in both countries.

Shakira also announced a three-year, $5 million commitment for projects for children in the region, where about 40 per cent of the population lives in poverty.

Most celebutards give a $1 million check to the popular charity of the day (pocket change for them) and then make sure to pose for lots and lots of pictures to make sure they can drum up some good publicity for themselves. Very rarely do they give significant amounts of money, create foundations, or take the time to actually learn the details of the charity they are supporting.

Two thumbs up for Shakira!

Michael Newdow must be very, very proud of these kids. If you don’t remember, he was the atheist who wanted the words “under God” removed from the…

END_OF_DOCUMENT_TOKEN_TO_BE_REPLACED

British police are investigating 10-year-old Jake Stedman for a race hate crime. The investigation was put into place after 35-year-old unidentified Slovakian woman (keeping the identity of…

END_OF_DOCUMENT_TOKEN_TO_BE_REPLACED

I can’t tell you how thrilled I was to read this story: Federal authorities have busted a statewide sex trafficking ring in which Central American women said…

END_OF_DOCUMENT_TOKEN_TO_BE_REPLACED

Meanwhile, everyone else on the set tells him to quit screwing around as he gasps for breath. 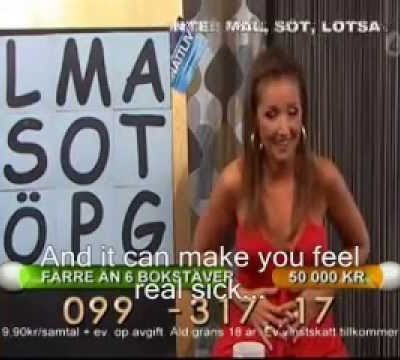 Warning: Do not watch this video if you’ve just eaten. A hottie Swedish game show host blows chunks everywhere, and right afterwards blames it on her… painful…

END_OF_DOCUMENT_TOKEN_TO_BE_REPLACED

Pop quiz. Let’s say you’re at Logan International Airport, the very same airport in which half of the 9-11 hijackers met on that fateful day to begin…

END_OF_DOCUMENT_TOKEN_TO_BE_REPLACED

I have joined the Dark Side

Scores for the weekend

Who here knows that I’m a HUGE football fan? No one? Yeah, I wasn’t paying attention at the start of football season and forgot all about my…

END_OF_DOCUMENT_TOKEN_TO_BE_REPLACED

I saw that headline and thought, this has gotta be good. And lo and behold, the story didn’t disappoint. South Africa’s crime problem has taken a new…

END_OF_DOCUMENT_TOKEN_TO_BE_REPLACED

First of all, remember that we are never, ever to question their patriotism. DailyKos diarist boilerman10 has posted a new diary explaining how to build an IED…

END_OF_DOCUMENT_TOKEN_TO_BE_REPLACED

The world has been captivated by the case of missing Madeleine McCann, who disappeared in Portugal months ago. The case recently took a disturbing twist when Portugese…

END_OF_DOCUMENT_TOKEN_TO_BE_REPLACED

Get that? The state that was the site of the worst terror attack in United States history is letting illegal aliens get drivers licenses now. They were…

END_OF_DOCUMENT_TOKEN_TO_BE_REPLACED

Remember the baby news about two months back? Well, here’s some new pictures of my beautiful baby sister Francesca for the weekend.

Who used to watch The Brady Bunch? One of the most familiar phrases from the show is Jan, the middle sister, whining, “Marcia, Marcia, Marcia!” After reading…

END_OF_DOCUMENT_TOKEN_TO_BE_REPLACED

A few weeks ago, I wrote a blog post about Kathy Griffin’s anti-Christian remarks: “Artists” lately define good art as anything that offends the mainstream, so taking…

END_OF_DOCUMENT_TOKEN_TO_BE_REPLACED

To my readers: I have to take a temporary leave of absence due to a family emergency. I’m sorry I haven’t been able to do any blogging…