The news just broke that the US Supreme Court has agreed to hear a case that will bring Obamacare back into the courtroom. 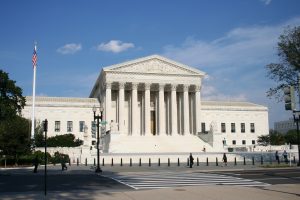 This time, the challenge to the law specifically addresses taxpayer-funded subsidies, which the IRS had decided were allowed in all 50 states. However, opponents argued that the Affordable Care Act only allowed for subsidies in those states that had set up an insurance exchange, and not available to people in states that had declined or failed to create an exchange and used the federal exchange instead. The appellate courts had split on this issue.

On that same July day, a panel of appellate judges in Washington, District of Columbia, sided with the challengers in striking down the IRS regulations. The Washington court held that under the law, financial aid can be provided only in states that have set up their own insurance markets, known as exchanges.

The administration said in court papers that the federal government is running the exchanges in 34 states and that nearly 5 million people receive subsidies that allow them to purchase health insurance through those exchanges.

For those federal exchange consumers, the subsidies cover 76 percent of their premiums, on average. Customers now pay an average of $82 on total monthly premiums averaging $346. The federal subsidy of $264 a month makes up the difference.

This will give the Supreme Court, which upheld Obamacare 5-4 the first time it made a ruling on the law, another look at it. Obviously, to rule that only people who purchase their insurance through state exchanges are eligible for subsidies would absolutely send shockwaves throughout the whole insurance system – even as people are struggling with the realities of Obamacare, which has meant low premiums but skyrocketing deductibles, which has given people who believed that they were now “covered” absolute sticker shock, and even the New York Times is admitting that the high deductibles are keeping people from going to the doctor. Bronze plans, which are the least expensive insurance policies in the Obamacare system, are estimated to be going up in some areas as much as 64%, but the insurance companies refused to release numbers until… after the election.

Enrollment on the Healthcare.gov website begins Nov. 15, or 11 days after the midterm vote, and critics who worry about rising premium hikes in 2015 say that’s no coincidence. Last year’s inaugural enrollment period on the health-care exchange began Oct. 1.

“This is more than just a glitch,” said Tim Phillips, president of free-market Americans for Prosperity, in a Friday statement. “The administration’s decision to withhold the costs of this law until after Election Day is just more proof that Obamacare is a bad deal for Americans.”

Buckle your seatbelts, everyone. Be prepared for the premiums to go up, the deductibles to be no better than they are now, and the outcry to be loud. Imagine how loud they will get if the Supreme Court decides that the subsidies only apply to states with exchanges. And with a Republican-controlled Congress, the odds that the law gets “amended” to extend those subsidies? Almost zero. (I say “almost” because I will never put it past any politician to do something incredibly stupid.)

Depending on how the Supreme Court rules, it could be the first step in defunding Obamacare.