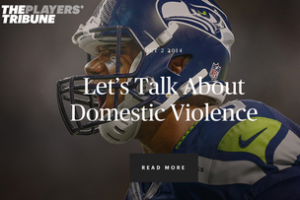 I used to beat people up. Truthfully, I used to beat people up a lot. Many of you readers probably think I have been Mr. Goody Two-Shoes my whole life, but honestly, I was a bully growing up. In elementary and middle school, I threw kids against the wall. I rubbed their heads in the dirt at recess. I bit them. I even knocked teeth out

Russell Wilson, quarterback for the Seattle Seahawks wrote the above quote and more yesterday for the Players Tribune, a new site run by newly retired NY Yankees shortstop, Derek Jeter. Wilson titled his letter, “Lets Talk About It.” What does he want to discuss? Domestic Violence

As many or all of our readers know by now; the issues and cover up of domestic violence within the NFL became horribly apparent over the summer. Ray Rice, with the Baltimore Ravens at the time, is now known all over the world because of his attack on his then fiancée in a casino elevator last spring.

Wilson, and another NFL player, William Gay, cornerback for the Pittsburg Steelers, are speaking up about the problems and heartbreak of domestic violence. Wilson outlines how he himself needs to change and will be using his Pass The Peace challenge to do so.  As many of his teammates have discovered, William Gay tragically knows first hand what happens when domestic violence escalates.

But I had no idea what was going on behind closed doors. I was 8 when my mother died. I was told, years later, that she was trying to get out. That she had finally found the strength to walk away from an abusive relationship that I had no idea about—at the time I didn’t even know what domestic violence was. My stepfather wouldn’t let her go, and things escalated. He shot her three times before killing himself.

Today William Gay speaks wherever and whenever he can about how domestic violence wrecks lives. He also volunteers on a regular basis at a domestic violence shelter in the Pittsburg area. Gay IS not only talking about it, he is trying to shine a light in the darkness. As he said to others when the subject of domestic violence came up with the debate centering on getting involved or not, he said:

Last year, I was with a couple teammates and the issue of domestic violence came up. Someone said, “What if you found out your teammate or your friend was beating up his wife or girlfriend? Would you intervene?”
The answers were mixed. Some said yes, but others said no—that it should be none of our business, stay out of other people’s personal lives.

That’s the problem. Answers like that are why domestic violence is still an issue. I told everyone, “Look, I don’t care who you are, if I find out you are hurting a woman, I’m going to say something to you and I’m going to do something about it.” In our society, grown men are taught to mind their own business and that it’s not OK to get involved. We need to figure out a way to fix that trend.

Lets look at the video of Ray Rice and his then fiancée Janay one more time.

Wilson ends his letter with this statement:

I can’t fix the world. I can’t fix the NFL. I can’t change the guys around me. The only person I can change is the one in the mirror. I’m not a perfect person by any means. I’m just a recovering bully. But if we start being honest about our pain, our anger, and our shortcomings instead of pretending they don’t exist, then maybe we’ll leave the world a better place than we found it. For those of us in the NFL, there’s no excuse for violence off the field.

This life-long Denver Broncos fan agrees wholeheartedly. Domestic violence is a hidden shameful secret that negatively impacts multiple lives. As uncomfortable as it makes all of us, the fact of the matter is, Wilson is correct. We do need to bring domestic violence into the daylight. The NFL “got it wrong” before.  But now, with leaders such as Russell Wilson and William Gay in the forefront, the league has the opportunity to help make it right. So, “Lets Talk About It.”   Lets shine a blinding light on the problems of domestic violence.  Lets save lives.