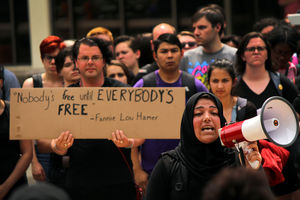 On April 19, 2016, at 1:40 p.m., hundreds of students walked out of class at the University of Tennessee Knoxville to protest the lack of diversity, as reported by Local 8 Now. The passage by the Senate of House Bill 2248 which prohibits the use of state funds for the Office of Diversity and Inclusion was the final nail in the coffin (Oops! I think I just committed a microaggression.).

The kerfuffle began in August, 2015 when the Office of Diversity and Inclusion issued guidelines (not mandates) for the use of new gender neutral pronouns. Gender binary terms are exclusionary to those who do not identify as male or female, you see.

Then,in December, 2015, the Special Snowflakes at the Office of Diversity and Inclusion issued guidelines (not mandates) for celebrations over ,, , , , End of Term festivities lest any of the student snowflakes be offended. The Knoxville News Sentinel reported the original guidelines:

The UT post includes “best practices for inclusive holiday celebration” such as holiday parties should have “no emphasis on religion or culture,” and games “with religious or cultural themes” — such as Secret Santa and Dreidel — should be avoided.

“Holiday parties and celebrations should celebrate and build upon workplace relationships and team morale with no emphasis on religion or culture,” one of the 10 recommendations reads. “If you want to exchange gifts, then refer to it in a general way, such as a practical joke gift exchange or secret gift exchange.”

Individuals who choose not to participate in a holiday party or celebration should not be pressured to do so, the advisory says. And holiday cards sent to campus and community partners should be “a nondenominational card or token of your gratitude.”

Now, I realize that the rest of the United States of America sees Tennessee, and particularly East Tennessee, as a bunch of backwards, uneducated, racist, bigoted, redneck hicks. Actually, we would prefer that you do see us that way. We get enough tourists as it is (Smoky Mountains). However, the fissile material for Fat Man and Little boy, the bombs that effectively ended World War II was developed in East Tennessee. Today, Oak Ridge Associated Universities and the Spallation Neutron Source are at the forefront of nuclear research. The University of Tennessee was once a fine university that turned out many of these scientists.