I hope you don’t mind my calling you by your first name. You seem like such a relaxed kind of guy, who doesn’t mind getting “familiar” with women, whether they want to or not, so “Al” it is.

I read in disgust about your foul behavior toward Leeann Tweeden. There’s no doubt she is a gorgeous woman – a former model and broadcaster – so who can blame you for taking some liberties, right? After all, you were a famous comedian and all, who WOULDN’T want your greasy paws all over their breasts and your tongue down their throat, right? 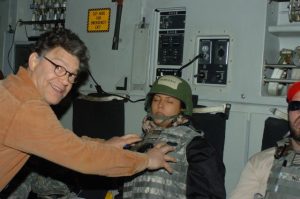 I don’t know if Ms. Tweeden accepted your apology. Maybe she’s more gracious than I am. I would have ensured that the moment you tried to stick your reptilian tongue down my throat, I kicked you in your shriveled raisins so hard, that your gonads would have broken your teeth as they flew out your miserable maw. And I would have destroyed you the moment the photo of you groping my IBA-covered breasts made its way to me, because you do not deserve the courtesy of the benefit of the doubt. You don’t deserve to represent the people of Minnesota. A sexual predator such as you cannot possibly represent the mostly decent people of that state or any other, for that matter.