Glo Smith is a Florida native raised in Jacksonville, and running for congressional office in Florida’s fifth district. Raised in poverty, Smith worked hard and found success for herself as an entrepreneur. She’s also a black conservative woman, hoping to unseat Democrat powerhouse Corrine Brown, who has kept her claws in the Fifth District for over twenty years. Brown is also a black woman, but she’s a good Democrat, so naturally, it was perfectly acceptable for vandals to do this to one of Smith’s campaign billboards: 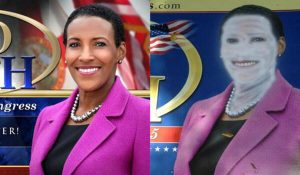 Who said it was acceptable? The mainstream media, who eagerly laps up and reports any incident they decide is racist against a liberal, while completely ignoring the avalanche of racist attacks that black Republicans face. Keli Goff explores this hypocrisy in the Daily Beast:

“As a black conservative often times you are thought of as an Uncle Tom or perhaps a traitor to your own race,” Smith told The Daily Beast. “I didn’t want to deal with that since we have such serious issues in our district that are way more important than this sign.”

… But once the incident was made public on June 29, only conservative and local outlets seemed to really treat it like major news. By comparison, a Nebraska parade float that featured an outhouse marked “Obama Presidential Library” drew international press attention last week due to its perceived racial connotations.

… According to former Republican National Committee Chair Michael Steele, who is African-American, the media do not seem particularly interested in covering perceived racial slights when the victim is a black conservative.

“In my race for the U.S. Senate, I was painted in blackface with big red lips and called an Uncle Tom,” Steele told the Beast. “I had Oreo cookies thrown at me during the Lieutenant Governor debate in 2002.

“And there seems to be this attitude they can get away with it and in a large number of ways they do. Because the press does not go after such attitudes the way they would if, for example, a conservative were seen holding a poster of Barack Obama in a disparaging caricature.”

Smith agrees. When asked if she believes race-based political attacks on black conservatives are treated less seriously than ones on other black Americans, she replied, “Of course, and you know that to be true yourself because you haven’t seen this story on liberal media channels or moderate [ones].”

To her point, there is regular coverage of Republicans accused of making racially biased remarks, whether they are nationally recognized figures, or merely local candidates and officials. I should know, having covered a number of such incidents.

But while the Republican National Committee has regularly denounced such incidents—even when the organization has no direct ties to the individuals involved—prominent Democrats and Democratic organizations rarely face similar pressure. This helps confirm Steele’s theory that attacks on black Republicans are not taken seriously by media.

“When the [Republican] Party tries to call attention to it basically the press just yawns,” Steele said.

Liberals consistently get a pass on racism — consider the incumbent Glo Smith is running against, Corrine Brown, who has exhibited her own racist tendencies, calling Mexican-American Roger Noriega racist. Noriega responded by telling her that her comment was offensive, and by pointing out members of the panel that were Hispanic; Brown answered that “you all look alike to me”. She also slammed her own constituents as racists. When asked about the vandalization of Smith’s sign, Brown shrugged it off as “ludicrous” to be talking about it, and made it out to be Smith’s fault for campaigning too early.

There are countless of these examples, and there’s a good reason why: liberals are the most racist people you could possibly ever find. Oh, sure — they’ll claim to love minorities. But they fight tooth and nail against the thought that a minority of any kind could possibly succeed on their own merits, insisting that they need the help of liberals in order to successfully accomplish anything. Minorities also aren’t allowed to have their own thoughts or opinions on anything. If a black American, or a woman of any race, dares to be a conservative, then watch out. Minorities aren’t allowed to think for themselves; didn’t they get the memo? They have to toe the liberal line, because liberals don’t think minorities are smart enough to figure it out for themselves and make their own decision. The white liberals know best; minorities should just smile and nod and say thank you.

And the media? They play along, shouting racism and playing the race card whenever they can, yet ignoring real instances of racism whenever it happens to someone who happens to have the wrong letter behind their name. Where Goff gets it wrong, though, is calling it a “secret” war. It’s hardly a secret. Liberals are the most intolerant, racist people you could ever hope to find. They just put a prettier face on it.