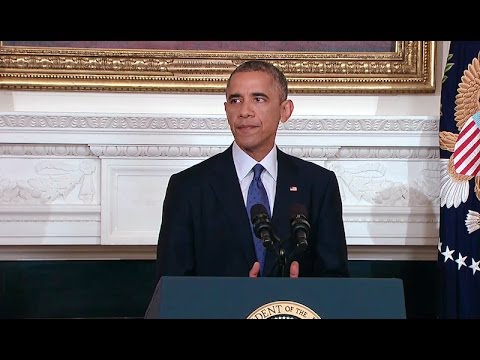 In the face of a crumbling Iraqi government, and the sheer dominance of ISIS (who have now just renamed themselves the Islamic State), President Obama last night announced that he has authorized airstrikes to stop an advance of the Islamic State if they advance on American personnel, and to break a siege upon Mount Sinjar, home to the small minority community of Kurdish Yazidis. The Yazidis, who practice an offshoot of Islam with elements of Zoroastrianism, have been declared by ISIS as “devil worshipers” and targeted for genocide. The president announced that the United States will be doing a humanitarian food drop in order to prevent the Yazidi people who have fled up Mount Sinjar from starving to death, saying that America must “act, carefully and responsibly, to prevent a potential act of genocide.” Airstrikes will be only done as needed to break the siege and protect the Yazidi civilians.

While I have no problem pounding ISIS into the dust, it seems that even in this moment of action, the administration still wants to make sure that EVERYONE knows that we are not going to be sending troops back into Iraq – or even that we would commit to helping other groups under attack in the future.

White House Press Secretary Josh Earnest acknowledged the situation is nearing a “humanitarian catastrophe” and and said it is one “we are deeply concerned about and closely monitoring.” Earnest claimed Obama has demonstrated a willingness to use military force to protect America’s core interests.

But when asked repeatedly by Fox News whether preventing a genocide — as some have warned could happen in northern Iraq — counts as being in America’s core interests, Earnest did not answer directly.

“The reason that is an important question is that we have seen a couple of different situations where there have been urgent conditions where innocent civilians were under extreme duress and at a heightened risk of slaughter,” Earnest said.

Asked the same question twice more, Earnest responded that “each of these situations is evaluated on a case-by-case basis.”

There’s the president we all know… always wanting an out if this doesn’t work quite according to plan.

I’m sure that Obama is hoping to drop a few bombs on the bad guys holding the Yazidis hostage on their mountain, drop some food and water up on the mountain, and then get to the golf course before the weekend starts. I am also sure that this will not deal with the festering abscess of evil that is the Islamic State – the group that the president flippantly called a “JV team” last January.

They are playing varsity now, and while they were getting their starters ready, Obama was working on his putt. I know they have more targets chosen and more plays in their book. It remains to be seen if President Obama has enough backbone to play their game, or if he will merely vote “present,” do as little as possible, and leave it for the next administration to deal with. Why am I even asking this question? We all know what the answer will be.