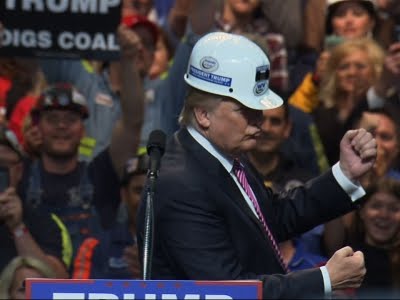 Nonsensical rambling from Donald Trump is pretty much par for the course now. Part of the issue is likely that he’s completely ignorant when it comes to virtually all political issues, whether it’s the economy, abortion, national defense, foreign policy, or immigration. The man not only has no clue about how anything in this country works, he doesn’t care. He hasn’t bothered to educate himself yet, and in all likelihood, he isn’t going to. So that’s one explanation for his crazy ramblings — he has to talk in circles because he doesn’t know what he’s talking about. The other part could be that, well, he’s just crazy. Consider this insanity when he tried to explain his abortion stance, or how he answered a foreign policy question by talking about how big his penis is. (But remember, The Donald has all the best words.)

Well, the literary genius held a rally for coal miners in West Virginia, his first as the presumptive GOP nominee. He started out with a ridiculous humblebrag, saying how sad he was that the primaries were over, because they were so much fun for him. Of course, there’s also that pesky fact that he’s about to lose miserably in the general, which could be why he’s already missing primary season. After talking about how the West Virginia Coal Association — whose name he couldn’t remember — and about how crooked Hillary is, things got… weird. Some coal miners greeted him at the podium with a coal mining helmet, which he wore while pantomiming mining coal as the crowd cheered. Then, he decided to give us his random thoughts about the most pressing issue our nation currently faces: hairspray.