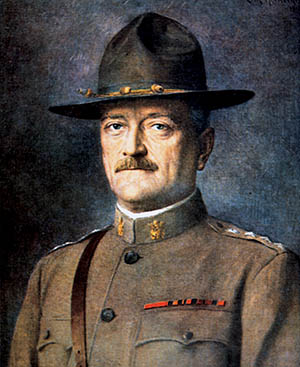 On the night before the South Carolina primary, Donald Trump decided to toss some red meat to his troopers by relating a little history lesson about General John “Black Jack” Pershing’s dealings with Muslims during World War I.

Addressing one of his yuuuuge rallies in North Charleston, South Carolina, Trump, in order justify “going much further” than water boarding suspected terrorists, told this story of how Pershing disposed of Muslims in World War I. Trump claimed the general had captured 50 Muslims prisoners, and then had 50 bullets dipped in pigs’ blood.

“And he lined up the 50 people and they shot 49 of those 50 people, and he said to the 50th, you go back to your people and you tell them what happened — and in 25 years there wasn’t a problem,” he told the enraptured crowd. He also told the crowd “you can read it in the history books.”

Only you can’t read it in the history books. Because the story is not true.

It’s an urban legend that originated in 2001, and circulated around the internet. Here’s an example:

David Emery, writing at Urban Legends for About.com, contacted a Pershing expert in 2003. Dr. Frank E. Vandiver, professor of history at Texas A & M and author of the book Black Jack: The Life and Times of John J. Pershing, told Emery through an email, “I never found any indication that it was true in extensive research on his Moro experiences. This kind of thing would have run completely against his character.”

And if you’re wondering if Dr. Vandiver exists, he does. Here’s a link to his bio.

Interesting that at the same rally, Trump ripped Ted Cruz as a man “who lies more than any other human being I have ever seen.” He also told Fox’s Greta Van Susteren that same night that he never, ever lies. “In fact, if anything, you know, I’m so truthful that it gets me in trouble. They say I’m too truthful.”

The only planet on which that would be believed would be Trump’s (no doubt dominated by a gigantic sign proclaiming TRUMP) and populated by his adoring Trumpa-loompas who just might also believe this:

And especially if Trump tells them so, it’s got to be true.