Since Tuesday’s news broke of the killing of Cecil the Lion by American dentist Walter Palmer, the news media and social media can’t seem to fill enough digital space with bile for the dentist. In fact, they can’t even find him.

Meanwhile, in the vicious jungle that is Washington, DC, a Republican Senator set his sights on some big game from the Obama administration, and it appears he bagged himself a trophy during a heated exchange. 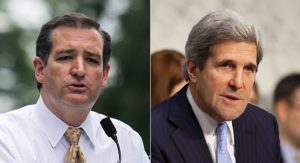 Secretary of State John Kerry has urged Congress to back the Iran nuclear deal, saying, “If Congress does not support the deal, we would see this deal die — with no other options.”

But at Wednesday’s Senate Armed Services Committee hearing, Senator Ted Cruz clashed with Kerry on whether or not America should then apologize to families of the armed forces killed by Iranian commander Qassim Suleimani. Kerry was angry and visibly frustrated.

Cruz not only bagged a trophy in besting John Kerry, he also snared Energy Secretary Ernest Moniz, when Moniz refused to be forthcoming about the possibility of an Iranian EMP strike on the United States.

Ted Cruz ensnared a big windbag in his hammering of John Kerry. Now Americans need to get their collective focus off the killing of a single lion and worry about the possible annihilation of millions of human beings if Iran is able to launch a nuclear weapon, thanks to the stupidity of John Kerry and the imperious attitude of Barack Obama in pushing through a disastrous deal.