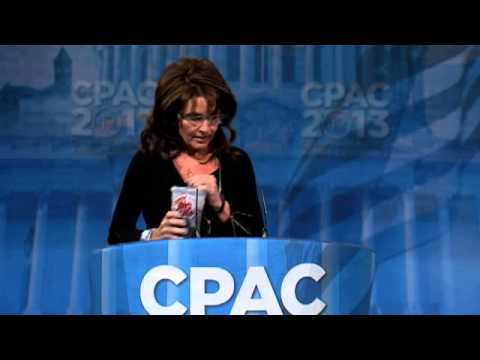 She represents everything libtards hate in women you know: beauty, family, guns, faith, liberty, and brains. Yes, brains. Sarah Palin spoke earlier today at CPAC and it was awesome.

When it was time for Sarah to speak, the crowd was shocked to see Texas Sen. Ted Cruz walk out onstage. Cruz said he was there to introduce Palin himself ahead of his keynote speech later in the afternoon. He reminded the crowd of Sarah Palin’s role in helping our current roster of young, conservative rock stars – like Cruz, Rubio, Paul, Scott, Toomey, Haley and more – get elected in the first place. He said this:

A fun moment came when Sarah Palin was talking about her husband Todd, she said “He’s got the rifle, I’ve got the rack” which is a line from the country western song by Dustin Lynch called “She Cranks My Tractor.” While the audience went to its feet on that line, she took a Big Gulp soda from behind the lectern and sipped from a straw, noting that it was OK since New York City Nanny Mayor Michael Bloomberg and his chronic overreach of authority was nowhere around. The crowd went nuts. Me too. 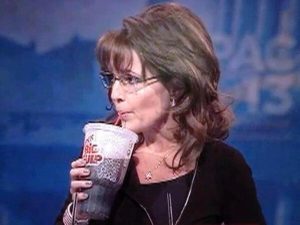 
One of her important points was this:

“The next election is 20 months away. Now is the time to furlough the consultants, and tune out the pollsters, send the focus groups home and toss the political scripts. Because if we truly know what we believe, we don’t need professionals to tell us.”

I still am a Sarah Palin fan. She looked and sounded great didn’t she? Her energy level had the crowd up and on their feet. She threw fearless punches at Obama, liberals, and Vichy Republicans that landed, hard. I’m thinking we should have Big Gulp moments now – everywhere across the country – just because we know how much the left will hate it.

Teach at Pirate’s Cove, who is fearless on the global warming hoax, is blogging about “Report: No Statistical Global Warming In 17 Years.” Go check it out!

Smitty over at The Other McCain has up a bunch of great blog posts on CPAC 2013 including a full report with videos on Jim DeMint’s speech “FINE SPEECH: Sen. Jim DeMint Remarks At #CPAC2013 President’s Dinner”.

ST at Sister Toldjah has up a post on that bloated leftist pig, Michael Moore: “Michael Moore: Let’s show pix of dead #Newtown children in order to destroy the NRA.”

Professor Jacobson at Legal Insurrection has up a terrific post today on “Sarah Palin takes CPAC by storm.” Though we’ve blogged on the same topic, we wanted to give a shout out to his!

Emily at NakedDC has a blog post up on “Joe Biden now one step away from reality television.” 🙂

Dana at The First Street Journal has up a really good post called “Rule 5 Blogging: Fun in Iraq.” It has pictures. 🙂

B5 over at Blackfive is blogging about “St. Patrick’s Day Technology – The Science Experiment.” Being Irish myself, I endorse this post. 🙂

This Ain’t Hell has a bunch of great posts up today but I like this one by Jonn on Mildred Dalton Manning, the last surviving nurse taken captive by the Japanese when they overran the Philippines in 1942. The post is called “Losing the Last Angel.”

Michelle Obama’s Mirror has up a terrific blog post called “Organize this, America!” 🙂

Instapundit has a lot of good blog reading up at his hub including THIS one… WHAT COULD GO WRONG?. Go read it!

American Power also has up a blog post on “With a Speech, Cardinal Set Path to Papacy.”

Jazz Shaw has a blog post up at Hot Air on “Gay Conservative” isn’t a fictional term.” Go read it.

and finally, Open Blogger (ChemJeff) at AoSHQ has up a blog post “Living Conservatively: Personal Finance.” We also want to congratulate Ace of Spades HQ for winning the 2012 Blog of the Year award presented this year at CPAC!