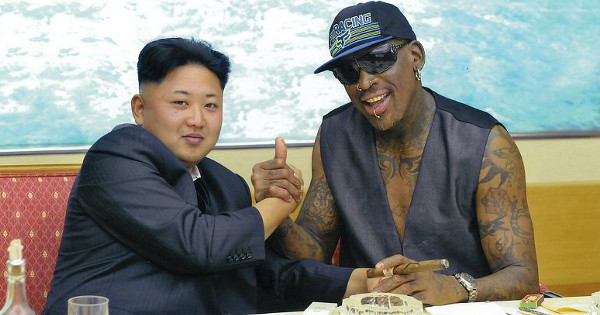 Because the world is not insane enough these days, yesterday NBA star Dennis Rodman upped the ante by claiming he was responsible for convincing his “friend” Kim Jong-Un to release Otto Warmbier upon his return from North Korea. It seems that Dennis arrived for a visit with his pal on the same day that Otto Warmbier was released and sent home in a coma. In a recent interview with ABC Rodman claims that he negotiated the Ohio student’s release from North Korea but did not know that Warmbier was “ill”.

Rodman’s agent, Chris Volo, claimed in the Good Morning America interview that he had asked for North Korea to release Warmbier three times prior to Rodman confirming his visit. This story runs counter to comments by Warmbier’s family that Rodman had nothing to do with securing his son’s release from the totalitarian regime. According to Rodman and Volo they think that they may be able to negotiate the release of additional Americans in North Korea. Rodman claims that North Korea has become more “civilized” and that the people around the world who criticize Kim Jong-Un’s iron fist grip on the country are wrong and “misunderstand” the petulant dictator.