Californians hate traffic unless of course, the president causes it. And the type of traffic I experienced last week accompanied by giddy-looking families in their Priuses and Stanford students on their bikes waiting to catch a glimpse of their hero could only have meant one thing- Obama was in town.

But the excitement that surrounded the President’s presence in California continued to be undercut by the recent exposition of the NSA’s use of cyber-spying on American citizens through Operation PRISM. This was accompanied by Obama’s promise to deal effectively with issue of cyber-security in his meeting with Chinese president, Xi Jinping. Although Obama continues to claim that China’s cybercrime against U.S. corporations and Operation PRISM are subjects for separate conversations- are they? Or should the issues raised by cyber-spying in our own backyards serve as a wake up call to the larger problem of cyber-espionage? Because the truth is, while PRISM might be a threat to our rights, China is a threat to our pocketbooks. 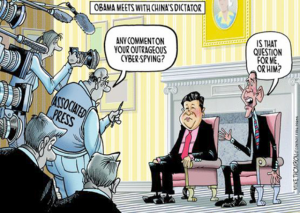 This is because the type of cyber-warfare inflicted on the U.S. by China is extremely detrimental to the economy through the continued theft of US intellectual property. Americans have been wary of China throughout history- and our wariness has peaked, as shown by a BBC poll that reported an 8-point increase in negative attitudes towards China. And that wariness is justified.

In an independent report, the Virginia-based cyber security firm, Mandiant detailed the extent of the blow dealt to the economy by China’s property theft from U.S. Companies which is now priced at $250 billion a year- more than what businesses pay in federal income tax.

It is also safe to assume that the prevalent theft of new ideas and other intellectual property from businesses prevents them from investing heavily in research and development out of fear that China has the ability to simply sweep in, and steal it. Mandiant revealed that once Chinese hackers infiltrate a system they, “revisit the victim’s network” and “steal broad categories of intellectual property, including technology blueprints…test results, business plans, pricing documents” and even the contacts of the company. The specific unit discovered by Mandiant hacked a U.S. Company for as long as 4 years and 10 months. Most concerning is that according to reports like Mandiant’s, these hacking organizations emanate from government organizations, namely the People’s Liberation Army. That’s a military, government organization hacking U.S. companies for the purpose of economic gain for Chinese companies. Sound unfair?

China’s economic espionage has reached an intolerable level and I believe that the United States and our allies in Europe and Asia have an obligation to confront Beijing and demand that they put a stop to this piracy.  This, from U.S. Rep. Mike Rogers, two years ago:

“Beijing is waging a massive trade war on us all, and we should band together to pressure them to stop. Combined, the United States and our allies in Europe and Asia have significant diplomatic and economic leverage over China, and we should use this to our advantage to put an end to this scourge.”

If Americans were outraged about the trade imbalance or the manipulation of currency- this should also outrage us. Americans are guaranteed the rights to our property; end of story and it is the government’s job to protect those rights. What the issue comes down to safe and legitimate global commerce, which is now being threatened by the lack of a cyber-security agreement between the two countries. A bipartisan act sponsored by John McCain and Jay Rockefeller of West Virginia called the Deter Cyber Theft Act would, if passed, be aimed at attacking this issue.

Editor’s note:  We’re so excited to introduce Katie as the newest blogger to the Victory Girl’s writing team.  In the coming days, please check the “About Victory Girls” page to read her bio!