by Kate in Headlines 50 Comments

Her name is Aliaa Magda Elmahdy and apparently she’s an Egyptian social activist and blogger who’s known for doing outrageous things to protest Islamic restrictive and misogynistic theology. However, up to this point, her “protests” have not run the risk of her being publicly beheaded by the most dangerous terror group in the world.

Here’s what she did.

“In the image, the 23-year-old feminist is seen facing the camera, while the other woman, dressed in a black hijab, has her back towards the viewer. Two presumably plastic machine guns are in the background, and the veiled woman is holding up her middle finger. The letters IS are inscribed on Elmahdy’s stomach and on the second woman’s bottom.”

And below, the gratuitous “Pooping on ISIS” photo. 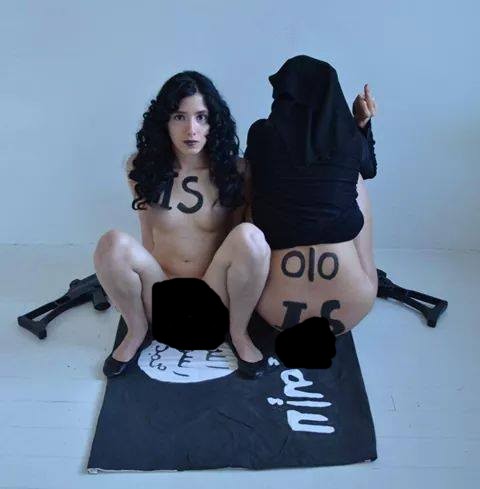 Arab media across the Middle East have avoided publishing Aliaa’s very creative protest photo, since the words “there is no God but Allah” are printed on the “desecrated” IS flag. Her actions have caused a lot of outrage in the region. But really, when isn’t that region outraged?

And whilst I am of the mindset that many fundamentalist Islamic men like to cover their women with as many layers as possible to minimize their very existence, this kind of protest on that issue may not be the best tactic right now with ISIS rising. Personally, I vote we skip the protesting and just kill ISIS – every last one of them and their favorite goat – no questions, no discussion.

Teach at Pirate’s Cove is blogging about this…“New Pause Excuse: Heat Hiding In Atlantic, Not Pacific”.

The Other McCain has many good blog posts up including this one by Stacy on “The Silent Terror: Media Ignoring Islamic Radical’s Murder of Seattle Gay Men?”.

ST at Sister Toldjah has up this post on “Let’s remember how #JamesFoley lived, but also how he was brutally murdered”.

Professor Jacobson at Legal Insurrection has up this post today on “What’s the difference between anti-Israel protesters in London and Chicago?”.

V the K at Gay Patriot has up this blog post called “Newspeak in the Time of Obama”.

Glenn Reynolds, Instapundit, has many great posts at his blog hub from all over the blogosphere so go check them out! And you can read Glenn’s latest article in USA Today on “The human screwfly solution”, here.

Dana at The First Street Journal has up a great post called “Why President Obama will never beat ISIS: he won’t even try.”.

Jammie at Jammie Wearing Fools has up this must-read post “Dearborn Cleric Popular With ISIS Has a Lot in Common With Al Sharpton”.

Donald Douglas at American Power has up this blog post on “Parent in Phoenix Says Administrators Made Her Son Wear Pink Fairy Wings on First Day of High School”.

Neo at Neo-Neocon is writing about “Europe pays ransoms, the US and UK don’t”.

Uncle Jimbo at Blackfive has up this post, “Leaking the raid that failed to find Foley in Syria”.

Ann Althouse has up a number of great posts, but I like this one – “The Washington Redskins need to change their name…to The Washington Posts”.

Jeff at protein wisdom has up this post, my favorite of the week, “My response to the execution by beheading of James Foley and others”.

Jazz Shaw at Hot Air has up this post up… “Obama administration routs scourge of ISIS pink cookies in schools”.

and finally, Ace at AoSHQ has up this post on “Profiles in American Labor Heroism”.